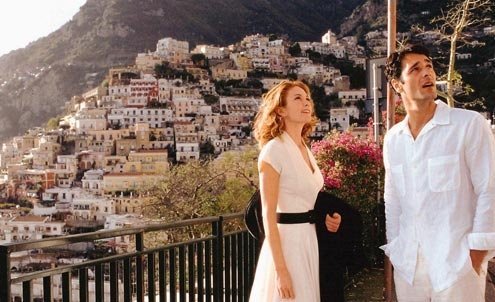 After spending her junior year studying in Paris, American student Sarah Marder decided to make a summer trip to Italy. “My reasoning was, ‘Hey, the Italians are good at all the things the French are good at — wine, food, architecture — but are just less somber.'” Marder, a Kansas farm girl who had moved east to attend the Georgetown University School of Foreign Service, eventually decided on an Italian-language course in the Tuscan city of Siena. Ahead lay an adventurous few months, or so she hoped.

Now, the trilingual Marder lives in Milan with her Italian husband, is the mother of four children (Elena, Isabella, Gian Paolo and Chiara) and has transformed her affection for Tuscany, which began that summer in Siena, into a full-fledged effort to make a film about Cortona, the ancient hilltop town celebrated in Georgia-born Frances Mayes best-selling 1996 memoir “Under the Tuscan Sun,” which chronicles a divorced writer’s efforts to build a rural home. Mayes published a new memoir, “Every Day in Tuscany,” in 2010.

But Marder’s history with the town — she calls it a “jewel of urban planning” — long predates its more recent celebrity. She and her husband Filippo married in Cortona in 1988, which at the time was one of many sleepy Tuscan hamlets. But Mayes’ book changed all that, giving the one-time Medici town a sudden global celebrity it has yet to fully absorb (Mayes’ first book was made into a 2003 Hollywood movie starring Diane Lane and Raoul Bova).

Marder, who had continued visiting the town regularly while working for Citigroup in Milan, watched the transformation as it happened, both amazed and troubled. Her farm girl background worried that the new waves of visitors risked “breaking my enchanted spell.” At the same time, she saw progress in the form of exposure and tourist revenue as potentially good for the community.

Fascinated by the ongoing transformation, she decided to document Cortona’s changes on film. Working with OLO Creative Farm, a Como-based production company, she began doing research and conducting interviews with residents and visiting celebrities alike. The result is “The Genius of a Place,” an independent, donor-supported film project she is co-producing with OLO, hoping to raise the funds necessary to edit 4,000 minutes of footage into a documentary she dreams of screening at the Sundance Festival. She wants the film to serve foremost as a tool for “sparking debate among communities wrestling with development issues.”

The reams of footage contain interviews with veteran British actors Anthony Hopkins and Jeremy Irons, as well as with Mayes. Marder spoke to Cristina Polli. These are excerpts from their conversation, followed by details and video links regarding Marder’s project.

What first drew you to Cortona at a visceral level, and how did the movie project arise?

I’ve known and loved Cortona since 1986, when my now-husband invited me for a weekend there. I thought I’d found a stunning corner of the earth. Over the last 25 years I’ve watched it change as a result of modernization, like many other places. I wanted to document the town before it was transformed beyond recognition, but didn’t know how I could do that.

In November 2008 I met Mattia Amadori, Andrea Corti and Max de Ponti, the co-founders of the OLO Creative Farm production company. I casually asked them if they’d be willing to explore the idea of doing a documentary together. That off-hand question was the seed. We settled on Cortona because I had the knowledge and access that we wouldn’t have had elsewhere. We all also thought Cortona’s sudden notoriety gave us the “something happened” element.

What’s your sense of Cortona in the Italian context?

I think of Cortona first and foremost as a town, certainly not a region, and not as Italy as such, but rather as a piece of the puzzle that makes up the Italian nation. As with many towns in Italy, Cortona has spent nearly its entire history as a semi-isolated, largely self-sufficient community. Towns were subject to invasion, thus understandably slightly defensive. Until the advent of modern transportation, places such as Cortona functioned nearly on a stand-alone basis.

How does a lovely small town avoid becoming a “tourist trap”?

I see a process I call “touristification” in which a place starts as an “undiscovered gem” and moves through a series of phases until it reaches the dreaded other extreme: the “tourist trap.” Where a destination stands in this spectrum depends upon the aggregate effect of specific single acts of commercialization of the place’s attractions. In moderation, commercial initiatives can liven up a place’s spirit and economy. Unfortunately, though, it’s not easy to rein in this process once it starts. Everybody wants to get a piece of the pie. From what I can see, commerce usually prevails. Our movie is a way of posing a basic question: Can a community somehow make thoughtful choices that reconcile today’s needs with a place’s long-interests?

When locals who say a town have become “less livable,” is that grounded in fact or a kind of crankiness toward change?

It’s a complex topic best rendered in gray. You need to look at both sides. Stores supplying the needs of residents are being replaced by ones that cater to tourists’ whims. It’s become harder to find a parking spot. During the summer you can barely squeeze your way through the main street. Real estate prices have become high for many locals. All these things are true.

The flip side is that before Cortona got notoriety, its economy was depressed and its population was dwindling. Some say that if it hadn’t been for tourism, living conditions for the residents would have gradually worsened anyway, just in different ways. Many elderly people say, “We were better off when we were worse off.”

No matter how powerful efforts toward “cultural conservation,” isn’t it inevitable that even a Cortona will be co-opted?

The very act of trying to put a place in a time capsule would ultimately make it unauthentic and dysfunctional, and not in sync with contemporary needs. Perhaps Cortona will be co-opted. The people of Cortona, or any given place, shape much of their place’s destiny through their own choices, whether they consciously realize it or not. We’re trying to get people to reflect and then make thoughtful decisions.

It’s fashionable to be concerned about change and transformation. But assuming the worst, what would really change in Cortona if it “yielded” to tourism? What’s the most the Devil could take from Cortona?

Sages have always said change is the only constant in the universe. That said, the speed and quality of man-made change have been accelerated by mechanization. Thanks to railroads, bulldozers, wrecking cranes and the like, mankind has far more transformative power than ever before. This new power has not been accompanied by an attendant leap in awareness or sense of responsibility.

Most of us have seen at least one place’s natural or artistic treasures ruined in recent times by man’s thoughtless intervention, not necessarily linked to tourism. Call that the Devil if you will. No matter what, it’s a very sad sight to see. We want to remind people that an ounce of prevention is worth a pound of cure. We want them to feel that the soul, beauty and livability of their special place is in their hands.

What kinds of problems can notoriety cause?

Accidental notoriety tends to be envied. I bet Frances Mayes has received frequent invitations to write books about other towns dreaming of becoming the next Cortona. Yet you can’t plan something accidental, just as it’s hard to manage accidents once they happen. The response usually is laissez faire. As I mentioned before, we’re wondering if there are ways for residents of any given community to feel less disenfranchised and to take personal responsibility for the well-being of their little patch of the earth.

Would you have ever embarked on a Mayes-like project?

I can only speak for myself. I moved to Milan to marry Filippo at age 23 and have spent my adult life wrestling with the complexities of a cross-cultural marriage, working in a foreign country and raising four children in a way that often baffles Italians. I once wrote an unpublished manuscript called “An Italian Husband.” Writing it helped me digest some of the quirky or irksome aspects of living in this beautiful but Byzantine land.

How open-minded are Cortona’s residents, culturally and racially? It’s one thing to invite Westerners, Europeans and Americans, another to really be open to all visitors regardless of race, color or creed. Do you see a line in the sand in that regard?

How open-minded is anyone? Most people prefer to be surrounded by people similar to themselves. That’s human nature. The advent of mass transportation makes movement easy, leading to far more intermingling of cultures than imaginable in the past. Some people enjoy this intermingling more than others. I wouldn’t want to generalize about Cortona or anywhere else.

On a personal level, do you remember your own first impressions of Italy? If so, what’s changed the most in your thinking?

The first year I lived here I thought I’d go crazy. I remember as a newlywed telling my husband he should “write his senator” about something I considered scandalous. When he replied that he didn’t even know who his senator was, I realized there was no mechanism for even attempting to get things fixed here. Over the years I’ve probably grown jaundiced; it’s much harder to scandalize me now.

What’s been the biggest challenge in making the movie into a reality and what advice would you give to people trying to raise funds for Italy-related projects?

Making a feature-length film is perhaps one of the most complex creative projects you can undertake. The challenges are too numerous to name. You’ll usually need three years or more to bring the idea to fruition. You need talent. You also need to know how to raise a fair amount of money. Without intrinsic motivation, it’s not possible. This is especially true for independent productions in which there’s a mind-boggling amount of work and you spend your own money on production expenses without knowing if you’ll ever find the funding to cover your costs.

I’m not in a position to give advice about trying to raise funds in Italy. It must always be tough and now even more so, given Italy’s financial straits. Also, independent film is far less developed here than in other countries so the rare crew adventurous enough to make the attempt will need to be resourceful.

In our case, to jumpstart our fundraising efforts, we decided to look outside of Italy by creating a crowd-funding campaign, seeking private contributions from anyone would like to support our work. We gladly accept donations starting at $10 and they’re tax deductible in the United States. We’re already getting a nice response from the public and hope even more people will decide to take the plunge and make a contribution to help us move the film towards completion.

— Marder and her team have produced an information site documentary trailer (with Jeremy Irons and Anthony Hopkins), a website, and also have a Facebook page.