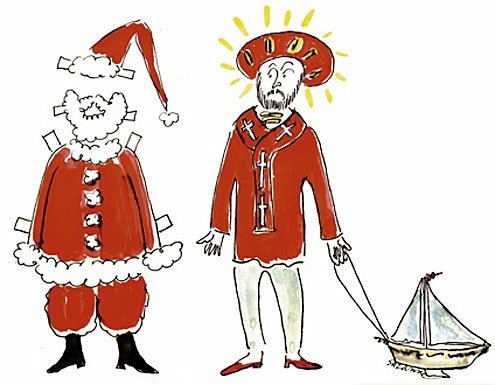 hink red, fat and jolly. Think elves, workshops and presents. Think reindeer, snow, and sleds. Think “Ho, ho, ho,” “You better not cry,” and “A Merry Christmas to all and to all a good night.”

Santa Claus was born a rich Turk named Nicholas in the third century. He did good deeds his entire life, using his wealth and his position as the Bishop of Myra to help the sick and the poor, as well as sailors and sea vessels. He was a devout Christian who paid for his faith through imprisonment and torture by persecuting Romans. He died two decades after his release. Soon after his burial in Myra, he was canonized Saint Nicholas.

Old Saint Nic’s transformation from the humble bishop who helped children and cared for boats to the jolly fat man in red has taken about 1,600 years. While he was alive, his kindness was legendary. People put out nuts, fruits, and sweets as gifts to honor him. After his death, ardent patrons built churches for him throughout the Christian world. Then, about a thousand years later, Saint Nicholas arrived in New York via the Dutch and the Germans.

Bit by bit, the holy image of Saint Nicholas was chipped away. First came a fictional work written by Washington Irving in 1809 that depicted Saint Nicholas as a chunky elf with a smoking problem who fell down chimneys while bearing gifts. Irving had joined a historical society that promoted Saint Nicholas and wrote the work to honor Saint Nicholas’ Day on December 6th. Irving’s work, called “Knickerbockers’ History of New York,” provided the inspiration for the poem that would solidify Saint Nicholas’ metamorphosis, “The Night Before Christmas.”

Eyes: twinkling. Dimples: Merry. Cheeks: Rosy. Nose: Like a cherry. Pipe: Clenched in his teeth. Smoke: Around his head like a wreath. Belly: Like jelly. In brief, a drunk fat man smoking a pipe in your living room, hence: “I laughed when I saw him, in spite of myself.”

Well you should, shouldn’t you?

From here, Saint Nicholas’ image deteriorates as advertising campaigns took over. Today’s Anglo-Saxon Santa Claus was invented in the 1930’s by a Coca-Cola marketing ploy. Jolly elf images ran for 35 years on every surface Coca-Cola could find, searing the image of an elf who’d given up his pipe for a nice refreshing Coke into American minds. Thusly, Saint Nicholas donned a red suit.

Like his image, Saint Nicholas’ name also took time to change. As Dutch and German immigrants began speaking English in American colonies, they lost phonetic hold on their respective pronunciations of “Saint Nicholas” — Sankt Niklaus for the German, Sinterklaas for the Dutch. Slowly, they mixed and merged and finally slipped to Santa Claus.

Nine hundred years before Santa’s true identity was swept under the carpet, his bones were plundered from his tomb in Myra, Turkey by Italian sailors from Bari. There were two reasons for the robbery.

The first was “divine” inspiration. Pope Urban II determined Saint Nicholas was ready for a change of scenery. Myra had come under Muslim control 1087. In an effort to keep ruins and relics intact — as well as pilgrims out of hostile lands — the saint’s remains needed a Christian harbor.

Second, holy shrines draw pilgrims, and where pilgrims go, so do the funds they bring with them. There’s money to be made. Both Bari and Venice, maritime republics, were interested in acquiring the relics so they could make an attractive, revenue-producing holy site. Bari’s team got there first.

When the sailors from Bari arrived in Myra, they found monks at prayer in Saint Nicholas’ shrine. The sailors demanded to know where the body was buried. The monks, at first unaware of the intent, complied. Then they got suspicious.

“I hope you guys aren’t planning on stealing the saint’s body from here,” one monk remarked caustically (in the jargon of the day). “Cause that’s not happening. Not on my watch.”

Hearing this, a Barese plunderer unleashed his sword and charged. “The saint’s body might not be the only one we carry out of here today, hai capito?”

The monks got the message.

They rationalized the loss by noting a vision they’d had of Saint Nicholas telling them: “If the villagers who fled from the Persians do not return to live in Myra, I shall have to leave this place.” The villagers hadn’t returned. Instead, the sailors from Bari had arrived. It was time for the saint to go.

The sailors collected the relics. The monks caused no further trouble.

But the remaining (Arab) villagers did. They chased the sailors to sea, slandering them for desecrating their sacred land. Many of them grabbed onto the rudders and oars of the boats, trying block the escape. They failed.

At home in Bari, the Dominican Order built a magnificent church (finished in the 12th century) to house Saint Nicholas’ remains. He was placed beneath the crypt’s altar in a bejeweled tomb. In the millennium since his arrival, Saint Nicholas has become the patron saint of Bari. An annual festival, May 7 to 9, commemorates Nic’s Bari landfall.

So Santa’s had it rough. He’s a Turkish born, American made chubby elf with roots in the Netherlands and Germany who has a fix for Coke and falling down chimneys when he’s not living in the North Pole thinking about presents. He lost his parents at a young age and had his bones stolen by the Italians.

And how do we thank him? With cookies and a glass of milk.

No wonder he only works one day a year.

The basilica has a site in Italian http://www.basilicasannicola.org

For the complete grave robbing story, check out: