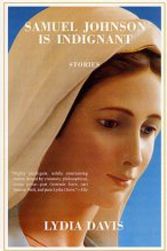 Here’s a line from the Davis story “Our Trip”: “…you certainly can’t tell anyone the whole truth, ever, because it would take too long.” Davis rarely takes long. She’s both butterfly and bee who deploys prose to punch and jab. Her stories are a paragraph, a page, a line, 20 pages: they are spurts that rarely sputter.

The Samuel Johnson of the title story is indignant “that Scotland has so few trees.” That, and not a word more, is the sums of his annoyance.

Davis is feral, funny, quick, with an eccentric sensibility. About a mean boss (“The Meeting): “How he jumps on me, how he strafes me, how he slangs me. I’m rocked.” About a quarreling couple playing Scrabble (“Old Mother and the Grouch”): “He says they should both make good, familiar words like the words he has made — bonnet, realm, and weave — but instead she sits in her nasty corner making ah, eh, fa, ess, and ax.” In “Letter to a Funeral Parlor,” this line: “As one who works with words for a living, I must say that any invented word, like Porta-potty or Pooper-scooper, has a cheerful or even jovial ring to it that I don’t think you really intended when you invented the word cremains.” An imagined overview of the life of Marie Curie (“Marie Curie, So Honorable Woman”) is an abbreviated biography with a poem’s compassion (Curie is “the twice-crowned queen of radioactivity.”)

Davis can speak of oil furnaces and a decaying father without trivializing either. She purveys a French respect for detail (she is a prodigious translator of French literature) and tells stories in a capricious and sly way. Great mischief in good hands is thrilling, and these hands are American beauties.