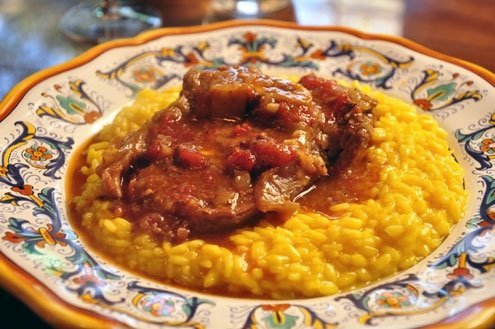 The right mixture of veal and rice makes the meal delicious.
F

or a long time I was convinced ossobuco meant bone marrow. I was wrong. Bone marrow is midollo osseo while ossobuco refers solely to the dish and translates literally to “bone-hole.”

That may sound unappetizing, but it aptly describes the dish itself, at least the way it’s made in Italy, where the veal shank is cut into discs with the bone in the middle. Various American versions slice the bone the long way, leaving the diner with a boatful of the rich meat-butter that marrow turns into when it’s slowly roasted.

As with most Italian dishes, a quick search for ossobuco produces countless recipe variations from all over the peninsula.

Making ossobuco itself is usually straightforward: flour and brown pieces of meat, sauté diced vegetables, combine in oven-safe pan, half-cover with broth, and cook on low heat until the meat is tender.

It’s the constituent ingredients that can change dramatically, altering taste and texture.

With this information in my back pocket, I had a long chat with my local butcher and came home with six slices of veal shank, each about two centimeters thick. Not surprisingly, the Rome butcher recommended a version of the alla romana mentioned above.

I opted instead for the more traditional Milan recipe, keeping it white (no tomatoes). While I firmly believe that good ingredients don’t need much tampering with, I did want to give the dish an earthier feel. I decided on fresh herbs — equal parts celery leaves and parsley (both mild) paired with half portions of sage and rosemary (stronger flavors).

This first round came out very well but missed its partner in crime, risotto alla Milanese, a dish that had never particularly impressed me. Turns out I wasn’t preparing it properly. Many people use olive oil in place of butter and bone marrow to make it the dish a bit healthier. In this case, health kills the real thing.

Preparing a full-on risotto alla Milanese is admittedly time-consuming. But there are shortcuts. The key ingredients are good butter, bone marrow, veal or vegetable stock, and high quality saffron.

It’s the veal broth that slows things down. The richest broth demands that you bake veal bones for 2-3 hours in a the oven on low heat and then simmer them in hot (but not quite boiling) water for 6-8 hours. To skip this step, use basic vegetable broth. Just chop up carrots, onions and celery and toss them in a pot of water, heated just before its boiling point, and let them simmer for 45 minutes.

When the broth is ready and simmering on the stovetop, melt one tablespoon of butter and one of bone marrow in a large pot (the butcher will give you an extra piece or two of bone if you ask nicely; you can scoop the marrow from one of these bones).

Let that melt and begin to brown. Add the rice, turn up the heat, and stir constantly until it starts to crackle. At this point begin adding in the broth in large spoonful for 15-20 minutes until the rice is nearly cooked. When you’re just about ready, add the saffron and some grated Parmesan.

This risotto made together with the ossobuco recipe below is a match made in heaven.