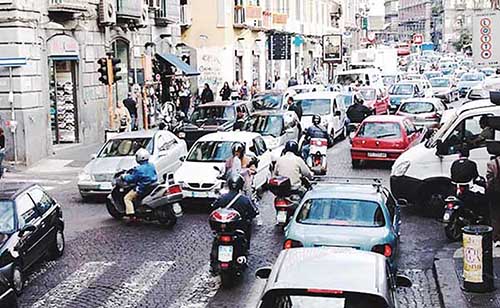 Having fun yet?
A

fter a decade of widowhood my ex-mother-in-law, Mariada, finally made a visit to the Italian telephone company offices to change her account from her late husband’s name to her own. The following conversation ensued:

Clerk: “If you want to change the name, Mario has to endorse it. You can just sign his name here.”

Mother-in-law: “I can’t sign it for him, he’s been dead for ten years.”

Clerk, helpfully: “Why don’t you step outside with the form and sign it in the corridor? When you come back in I’ll pretend it’s the first time I’ve seen you.”

In Italian, the word infrazione means a petty violation of the law. It’s a word some Italians are reluctant to translate.

Example: a colleague was telling me how to get to the university. “You drive down Via del Quirinale to Largo Santa Susanna, and then… [pause] no, you’re too American, you can’t.”

“Well, then you have to make a slightly illegal left turn, a minor infrazione, it’s the only way to get there.”

Italian rules often seem made to be broken. At the same time, But they can turn inflexible at the worst possible moment. I once helped a schizophrenic patient through infinite red tape to get an Italian disability pension, a welcome supplement to his meager wages from a manual job it took him an hour to drive to. A week after he received his first pension check, he was notified that now that he’d been certified as disabled and his driver’s license was automatically revoked.

The casual lawlessness rubs off on you. I shocked a friend by distractedly swinging around a dozen cars waiting at a California tollbooth to get a better place in line. I shocked myself by swearing to the State of New York I’d lost my drivers license when I’d actually handed it in to the authorities here in exchange for an Italian one. I shocked my mother by suggesting on the phone she forge my name to a jury duty summons. (oOnce the shock subsided, she practiced my signature and did just that). In fact, she savored the glee of transgression after 65 years of walking the straight and narrow.

The behavior of Italians is governed by the ad hoc and the face-to-face. They consider Americans’ reliability to be rigidity, their rules unwarranted limits on options, their tendency to plan everything a brake on spontaneity, their lofty ethical precepts hypocritical copouts intended to avoid the full and fickle complexities of human relations. Romans prefer a “half date,” a mezzo appuntamento, to a definite one, and they don’t hesitate to cancel at the last minute if they’re feeling tired or antisocial. When I told a friend this seemed rude, he said an unwilling dinner guest wouldn’t be fun anyway.

Italians disdain rule-worshippers in the same way the illiterate disdain those who can’t remember anything if they don’t write it down. My friend Daniela once made a U-turn on an empty small-town street in Switzerland. A woman leaned out her second-floor window and yelled a reprimand. Daniela – from Italy’s relatively law-abiding North – responded by making another U-turn, then another, then another.

Italians are great improvisers and seat-of-your-pants decision makers. They farm by lunar phases when they’re not designing Maserati’s Maseratis. They like having low-tech backup. They wear a condom but pull out anyway. Third World travel makes them shine: when things go wrong, Italians devise a fix while Americans are sit around waiting for the authorities to show up. Neapolitans, allergic to rules, call it l’arte di arrangiarsi, the art of muddling through.

Some people think Romans ignore traffic lights. A scurrilous lie. It’s not all lights, just the ones deemed unnecessary by popular opinion – you’ll be honked at if you stop.