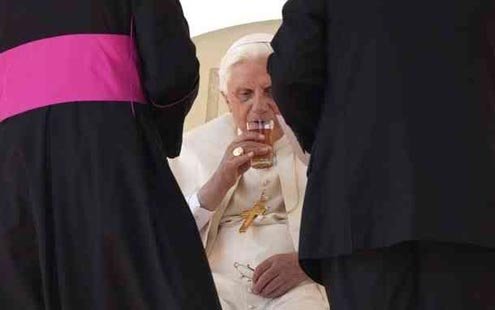 n times of political and economic turmoil, the average Italian could be forgiven for counting on one stable figure. The pope. Like him or not, he least he couldn’t quit or be fired.

But wait: he has quit.

Italians can sometimes seem like the crew of a ship without a captain, completely adrift. Not like the “Costa Concordia.” At least the cruise liner more or less made it to shore, albeit in the worst possible way. Italy doesn’t even have a shore to run aground on.

And now the pope resigns!

I first heard the news while at a mental health clinic (of course). More to the point was how I heard it. Running down the clinic halls was a young man screaming, “The pope, the pope… the pope is gone…” The attending psychiatrist I was chatting with stopped the man, who looked a taller and thinner version of Mr. Bean, and asked him what was going on.

I instinctively checked my smart phone, and there it was: “Pope resigns.” Inside me, something shouted, “nooooooooooooo,” a kind of physical rejection.

And now the man who was supposed to be both guide and bulwark for all us lost sheep had also decided to get out of town. I understood why Mr. Bean was running and screaming. Take away people’s points of reference and they panic. The crazy become crazier and the sane go mad.

The same afternoon I was playing with my young son Lorenzo. It was pouring outside. Then came a huge thunderclap. The building shook as if someone had planted a bomb. Now I was thinking about terrorist attacks. I came back to my senses and scooped up Lorenzo, who’d started wailing. I told him it was just lightning. Later came the news that the dome of St. Peter’s had actually been hit by a lightning bolt (I live a few blocks from the basilica). Was it a sign?

Right now, Italians need a miracle, and maybe the lightning bolt was a start, a reminder of sorts.

I told myself, “No matter what happens after the elections and no matter who’s elected pope, we’re Italians: we still have pizza, pasta and gelato. None of them has quit. That by itself is a miracle!”

Strange to be thinking that, since a few days later I was reading about the pope’s diet and daily menu (Not enough pasta? Too little pizza?)

The truth is, Italians can’t get enough of talking about what people eat, too much, too little, what to put in, and so on. Out of curiosity, I Googled “cosa mangia il papa?” – what does the pope eat?

First up was a forum, a not entirely cheerful one. “Who cares what he eats? We should be worried about what so many children of God don’t have to eat.”

Conclave participants are traditionally cut off from the outside world. The church even assigns internal commissars to check all their meals to ensure messages aren’t concealed in the incoming food. Legend had it that flan was barred, lest someone stick a (sticky) message inside it. Silver serving trays were also out since someone could scrape information on the silver.

The son of a cook, Joseph Ratzinger apparently likes simple dishes. He loves smorrn, a cross between a crêpe and a pancake that’s popular in Alto Adige, Upper Bavaria and Slovenia. He also enjoys citrus fruits, oranges in particular. Whether either will be on the menu in his retirement monastery is anyone’s guess.

— Mash the veal with a meat mallet, then put half-a-slice of prosciutto and a sage leaf on each cutlet. Connect the three pieces with a toothpick and baste evenly with flour.

— Melt butter (or olive oil) in a pan and lay out the cutlets. Season with salt, pepper and let them brown well on both sides over high heat.

— Remove the saltimbocca and arrange them on a warm serving dish.

— Pour a glass of wine into the cooking pan, creating a thick and even sauce. Pour some of that sauce on the waiting saltimbocca.

— Serve the saltimbocca hot, and pour the remaining sauce into a gravy boat.

As for wine pairings, saltimbocca is best with a Cerveteri or a Velletri red, or a robust white, such as Frascati Superiore.