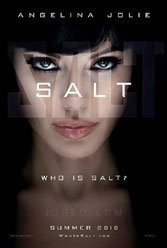 Implausible and occasionally silly, “Salt” is still good Saturday matinée fodder. That’s largely because director Philip Noyce covets his central asset: Angelina Jolie. Without out her, this is a middling action thriller with a video game’s brutal ethics. With her, it’s a diva-powered locomotive that focuses on a face as beautiful as any on the planet.

Jolie is Evelyn Salt, a CIA agent who’s been sprung from a North Korean prison thanks to pressure from her doggedly loyal German husband, who has no idea about her true identity. Playing on the cool interaction between Salt’s CIA boss Ted Winter (Liev Schreiber), Noyce toys briefly with the prospect of a reluctant spy caper in the vein of Renny Harlin’s delightful “The Long Kiss Goodnight,” which put Geena Davis and Samuel L. Jackson at parody’s (and action’s) beck and call.

No such cigar here. Instead, Salt meets a Russian defector whose revelations kick-start 60 minutes of stunt-driven action. Suddenly, Russian sleeper cells awaken and Salt is on the run. Layers of deception replace identity and history. The Cold War gets a revival. The humorless storyline hinges exclusively on the moods and weaponry of its pretty assassin (her unofficial kill total is around 30).

To her credit, Jolie is an old-school Hollywood star. She shifts stylishly between humanity and ferocity. The little time she’s gets to develop a character are spent wisely, same with Schreiber (too bad neither gets the room to roam room Matt Damon was afforded in the Bourne franchise). Noyce, who directed Michael Caine in “The Quiet American,” resists most cheap vulgarity: Vengeance is the film’s sex. Why the surname Salt? Think Strategic Arms Limitation Talks. Problem here is that no one talks enough.