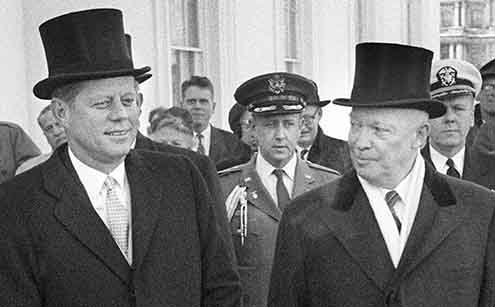 In 1961, outgoing President Dwight Eisenhower, right, warned of the ascent of a so0called military-industrial complex: "The potential for the disastrous rise of misplaced power exists, and will persist."
T

he three decades between 1950 and 1980 witnessed lively debate about the virtues and shortcomings of capitalism. After all, it was capitalism that won World War II, with America’s ferocious wartime enterprise and ingenuity proving too much for both Nazi Germany and Imperial Japan. The postwar split was an ideological creation, with the capitalist West up against the totalitarian and anti-Christian Communist East, the Soviet Union bossing the latter. The Soviets had also won the war, but at a human cost — some 50 million dead in combat and purges — that appalled the West almost as much as the ethos of communism.

This East-West split stirred up intellectuals — writers, philosophers, politicians — troubled by the prospect of a brave new world based on military-industrial priorities alone. The controversy generated a disagreement that even Dwight Eisenhower, a general-turned-Republican Party president, entered into, warning of exaggerated military influence. In terms of capitalism, the division had less to do with the greater glory of consumerism than the values it seemed to encourage, including greed, indifference to the less affluent, and a willingness to countenance a new world war notwithstanding the existence of annihilating weapons.

The sudden economic collapse of the Soviet Union in 1989 summarily ended that debate. Capitalism had effectively “won,” communism was all but dead, and the currency of the future was currency itself, its systems and priorities. Post-Communist Russia nearly snapped under the weight of carpet-bagging avarice, rescued and reconstituted by nationalist Vladimir Putin. Eastern Europe struggled mightily to take off. Big-power Europe created a union and a common currency and for a time seemed smug. The United States, cut to quick by home-soil terrorism in 2001, moved from postwar idealism to a bunker mentality driven by fear and prone to neo-isolationism. The wider humanist debate about the relationship between capitalist goals and culture, between national assets, unbridled consumerism, and the common good, took a back seat to money’s middle class status, measured in bad recessions and good iPhones.

But the advent of Donald Trump has changed the landscape, imposing a suddenly starker reality. The language Trump knows — the only one he knows fluently — is that of millions, billions, trillions. He speaks the lewd and often self-interested patois of ruffled bank notes. In pulling out of the Paris climate accord, his emphasis was almost entirely on sums, saved or not wasted. The spirit of the accord, above all else a globally communitarian gesture, was refused entry into the language of the exit. Trump instead dwelled on the latest bunker-speak, contingent on bottom lines (real and imagined) and a world seen in terms of who’s clever enough to better capitalize, better cut losses, better strike a shrewder deal. This calculus, unfettered by intellectual poetry, is pure bang for buck. Any undertaking absent the “right” numbers is a “foreign” parody at American expense, and Trump mocked Paris in just those terms. His is a selfish and impressionable ideology that substitutes a slew of ciphers for the public good capitalism once positioned against communism on the premise private property ennobled and helped moralized those who aspired to it.

In the 1950s, intellectual fondness for communism had less to do with Stalin than the imagined Nirvana of economic egalitarianism. In Soviet fact, there was no such Nirvana, and the system collapsed under the weight of its own negligence. That didn’t stop leftist thinkers from worrying that a subsequent be-all, end-all dependence on commercial priorities might eventually cancel out ethics and art, luxuries alien to the louder grinding of capital flow. They fretted aloud about a conversation focused exclusively on the millions and the billions, whether GNP or the number of dead in a nuclear war. They feared the second coming of a society modeled on William James’ “bitch-goddess SUCCESS,” able to dispense with a national sense of communal optimism. These worries, spawned by Industrial Revolution income gaps, were groundless for half-a-century: no “numbers nationalist” emerged.

Now he has, giving all pause to reckon with a president most at home with bottom lines and a global vision styled in the vein of a heroic real estate deal in which talk of opulence ultimately takes a back seat to sale and commission.