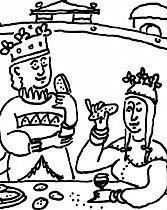 hen the conversation turns to vin santo, every Tuscan wine maker I have ever met wrinkles his brow and ominously warns that although he makes vin santo using the traditional method, most other producers aren’t as conscientious.

Truth is, almost none of them really make vin santo the way it is supposed to be made. The process is just too long, difficult, and costly for most winemakers to resist the temptation of using the synthetic colorings and artificial sweeteners that make the process much, much easier, and at a fraction of the cost.

But anyone who has tried a real vin santo won’t soon forget the dense aroma of dried fruit, tobacco, nuts, and caramel on the nose; the classy, musty and complex richness on the tongue; and the long and warm finish. It really is one of the highlights of Italian cuisine.

Any regular readers of this space know that I usually try to highlight ways to enjoy the best of what Italian food and wine has to offer without making your bancomat card overheat. This, however, is an exception: a good vin santo is likely to set you back at least €30 for a half bottle, and the best can weigh in at more than €100. Double that if you find it on a restaurant wine list. But would you believe me if I told you it is worth every centesimo?

The process starts with the selection of a small quantity of the best Malvasia, Trebbiano, and Grechetto grapes that are either dried on cane mats or hung for the same purpose in an airy room for a total of around six months. After that they are repeatedly pressed over the next several days to extract whatever liquid remains, then the juice is clarified for a month, and then — according to tradition, this step takes place only under a waning moon — the must is sealed with wax into cigar-shaped oak or chestnut casks called caratelli along with a fermentation-aiding liquid made up of the winemaker’s personal mix of yeasts and nutrients called the “madre” … then the whole thing does nothing more than take up space for half a dozen years or more.

Most wines are aged under precise temperatures, but vin santo is traditionally aged in the wine maker’s attic — the high sugar content makes it stable enough to withstand the extreme conditions (the same sugar content also allows a bottle to remain open and healthy in your refrigerator for weeks on end). The seal on the caratelli is opened with a great deal of pomp and circumstance, the wine is tasted, and everyone on hand celebrates.

The amber-colored nectar is drawn off and bottled, and the madre is used again for the next batch. The whole process can make the four-year method of producing a top-notch Chianti seem only marginally more difficult than mixing a rum and Coke on Friday after work.

How do you tell a good vin santo from an impostor? Unfortunately, the first indicator is probably price — there’s just no way to make real vin santo on a budget. Another is the vintage. If there is no year printed on the bottle or it was made this century, it’s probably one of the often insipid and oxidized pretenders.

The producer is another good clue. Over the years, I’ve had excellent vin santo from several houses. The dean of vin santo makers (with a price tag to match) is Avignonesi (they also make a mythical vin santo called Occhio di Pernice that I’ve never been lucky enough to taste), but I’ve had delicious and more moderately priced bottles from Altesino, Bindella, Cappezzana, Castello di Monestero, Fattoria le Fonte, Isole e Olena, and Selvapiana — by no means an exhaustive list, but a good starting point.

But the easiest way is to simply seek counsel from the owner of a good wine shop, who will know what you are talking about if you stress you want a vero vin santo.

Once you’ve got a good bottle in your hands, the next trick is figuring out what you want to eat it with. The rule of thumb for mixing dessert wines with desserts is that the wine should be sweeter than the dessert, which is why vin santo is traditionally served with dry, crumbly cookies called Cantucci, a specialty from the area around the Tuscan city of Prato.

But if I’m drinking a wine that’s a decade in the making, it can sometimes seem a shame to share it with a dessert that was little more than flour, butter, sugar, and a few nuts a week ago. For me, vin santo’s delicious flavors are a dessert by themselves.