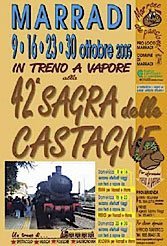 We have a sagra for wild asparagus, one for olive oil, one for cherries, and one for eels.
F

rom time to time, my day job takes me to Holland, one of the few places where I feel incredibly small. Now, I am by no means vertically challenged, but in this land of giants I’m a complete titch, dwarfed by towering Dutch people still in their teens. In fact, I read recently that the Dutch are now the tallest nationality in the world — even bigger than the Americans — and living in Italy, where I have gotten used to peering over the heads of many people, their size is all the more striking.

Some nutrition experts may attribute this phenomenon to the quantity of milk or butter or Gouda cheese that the Dutch eat. Or maybe to all that beef and pork. But I am not so sure. My own, admittedly as yet unproved theory is that the Dutch are huge because they eat so much chocolate. Take a look at any railway platform or airport lounge in Holland and you will see that they are choc-a-bloc — excuse the pun — with machines dispensing chocolate in every shape and form — Mars bars, Maltesers, Twix Bars, Toblerones, and everywhere you look you will see giant-sized people munching on them.

Frankly, I cannot imagine anyone in Italy — either male or female — risking the brutta figura of being caught in public with a Mars bar jammed in his or her mouth. Much as Italians love their food, most would rather die than be seen in such an unflattering pose. A dainty tramezzino or cornetto in the sanctuary of a bar is one thing, but scoffing chocolate in the street — mai!

They are helped, of course, by the strange ritual of withdrawing chocolate from just about every shop and bar the minute the hot weather approaches, a fact I have always found rather bizarre. Finding a piece of chocolate in summer here in Italy is like looking for the Holy Grail. Think of those irritating Ferrero-Rocher commercials each September, announcing the return of Italy’s favorite confectionery. Italian retailers could, of course, just keep the stuff in fridges, like everyone else. But Italy enjoys its seasonal rituals, and who am I to argue?

One seasonal rite that I find rather trying, however, is this cambio di stagione malarkey, which involves putting away/getting out all your winter/summer clothes twice a year. It’s all very well when there is just one of you, but when you have to multiply the process by five, it all gets very tedious.

Here in Spoleto, I am surrounded by mountains of boxes containing sweaters, coats and jackets belonging to myself, husband and three children, all needing to be unpacked, shaken — and if I were a really good housewife they’d be re-washed and ironed too — before being put back into exactly the same drawers and closets that I removed them from just three months ago. The whole mind-bogglingly boring process takes about a week and elicits much ill humor on my part.

But Italians are creatures of habit, and as I’ve learned to my cost, it’s hard to beat the system. Try wearing sandals in September, when autumn has officially set in, and you will be summarily stared at. I remember my youngest daughter’s teacher in Rome being appalled when I sent her to school without a vest over her short-sleeved tee shirt. It was early October and stiflingly hot. But rules are rules, and the vests go back on in September. In Umbria, the local swimming pools all close at the end of August, because that is when summer ends. Never mind that it is still 30 degrees and you could fry an egg on the sidewalk. It’s a bit like in Greece, where people solemnly go around wishing each other Kalo Ximona (Happy Winter) on August 16.

Another time-honored ritual in these parts is the village sagra. These bucolic festas, generally held in spring and autumn, are, like so many Italian festivities, basically an excuse to do a great deal of eating. Traditionally, they revolve around a local product, and at their best, they act as a showcase for the local community. This being Umbria, we have a sagra for wild asparagus — fair enough — one for olive oil, one for cherries, one for eels, which I could do without, and another for wine. But in recent times, I’ve noticed an insidious spread of these festas, to the point where it’s all getting out of hand. Call me a killjoy, but I rather suspect some people may be jumping on the bandwagon, thinking up any excuse to filch a few euro from people desperate for a day out. Last week, I spotted a big banner announcing a sagra della pasta. Now how long did it take them to think up that one?