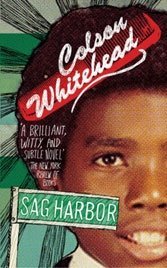 Colson Whitehead’s fifth novel isn’t about the paradox of being black and rich. That’s just a backbeat, a pulse in a crowd of competing rhythms. Its real theme is reinvention: how its 15-year-old old protagonist Benji Cooper spins a cocoon from summer, that precious if fleeting relief from high school, and emerges with wings.

First rule of adolescent reinvention, lose the braces. Then learn how to kiss. But Benji, one of few African-Americans attending a private high school in über-white midtown Manhattan, is on the teenage fringes for reasons less classic. For one, he prefers new wave darlings The Smiths to hip hop’s Run D.M.C. Dungeons & Dragons stratagems are his second and third languages, but the latest handshake fad — fresh from the streets — perplexes like a riddle (one pal’s fist is “jive-ass flutter” smashing into another friend’s “aggressive pump-‘n’-dump”). When Benji’s father, a doctor, and his mother, a lawyer, drop him and brother Reggie at their Hamptons vacation home for an unsupervised summer, he sprints at the chance to slough away his geek skin. That is until summer splits off into its unexpected detours.

Benji’s coming-of-age is as rough as his friends’ boyish chatter (“Angela Davis-lookin’ motherfucker”), but still tender. Whitehead understands that most teenage smack talk is a ruse. It’s why he’s dedicated an entire work to Benji’s comforting, if sad, observations on outgrowing his turtle shell. The language is rich with poignancy, a beatboxer’s cadence, even when he playfully excuses himself for bumping into the breast of a cute coworker (“…there was plausible deniability vis-à-vis the tit collisions, between gravity working on her body, and my long, skinny arms”). Rarely does Whitehead’s streetwise pageantry of slang feel excessive. Few authors can derail Standard English with such verve and expertise.

Ignore the occasional plot holes (the unhealthy marriage of Benji’s parents; a passing reference to a violent drug scuffle that never unfolds and is never explained) and what remains is a worthy tale of a forgotten demographic.

“Sag Harbor” may be too impressionistic to call a novel. The narrative rarely congeals beyond a tableau of interconnected short stories. But that fitfulness is the way of summer, and youth.