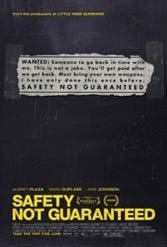 Generous movies about earnest misfits seem easy enough to plot and make, but they’re anything but. The would-be guileless often fall victim to caricature or feel contrived. Not here. Instead, whimsy-loving director Colin Trevorrow manages to concoct a sublimely charming story about boys and girls, love and premature regret, and wishing upon dreams to make them come true.

Twenty-something Darius (Aubrey Plaza) is an intern at a Seattle magazine. She dreams big but expects less. She is, she tells her father, “totally funkless.” But along comes an odd assignment to help track down a man who’s published a classified ad asking for a partner in time travel (“Must bring your own weapons. Safety not guaranteed.”) With fellow interim Arnau (Karan Soni) and self-serving lead reporter Jeff (who sees adulthood into terms of a condo and an Escalade), the jaded band of three heads to the town of Ocean View, Washington. There, Darius becomes bait for reclusive, physics-talking, bandana-clad oddball Kenneth (Mark Duplass), a seemingly paranoid thirty-something convenience store clerk who has an artificial ear, plays the zither, and is determined to go back to the year 2001, which is when he says his girlfriend died. He’s a comic Rambo focused on a “mission.”

Dubious Darius plays mouse to Kenneth’s crazy cat, coyly offering herself as his partner in what everyone except Kenneth considers a loony bit of made-up sci-fi: After all, it’s all for Jeff’s story about a weird eccentric. But Kenneth’s dreams of going elsewhere are all about not fitting in, and lo and behold if Darius doesn’t come to dream in his language, because she, too, is a square peg in a round hole.

Slacker reporter Jeff (Jake Johnson) is also trying to travel backward, wooing a long-ago girlfriend and reckoning with the fact he’ll never be 21 again. Add Arnau, Darius’ delightful Indian-American fellow intern, and Trevorrow suddenly has a richness of human toys, each one a young sliver of self-consciousness and regret.

Put Kenneth’s boys-will-boys time machine hijinks together with Darius’ “Over the Rainbow” swoon — both Plaza and Duplass are winning — and you get a sweet but insightful romantic comedy about a small group of people suddenly ready, willing, and able to make good on being different.