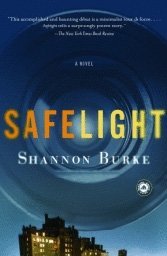 Burke has a knack for urban purgatory. As in the more accomplished “Black Flies” (2008), Burke employs a young paramedic narrator as a guide to New York’s 1990s netherworld. Frank Verbeckas is a chronic, laconic loser (“dumb fuck … college boy”) whose brother Norman is a successful surgeon. Diffident Frank (who kowtows to his thug partners and goes along with two-bit corruption) deals with the worst of what he sees by photographing it: A man mercy-killing a sick dog with a baseball bat while sobbing; a three-week-old hanging suicide whose neck has been elastically distended; an electrician charred all-black by a jolt. “I am about to die,” says the electrician. “We won’t let you,” replies Frank. Nonsense. He’s dead minutes later. Frank’s partner Jack Burnett warns him not to get soft.

Burke’s grotesque is a planet of short, clipped sentences. Its people are spare, resistant to sentimentality, ultimately decent. An AIDS-sick hooker “with a circle of yellowish puss in the middle of her face” lets Frank photograph her and says, “Come back when you’re positive.” Even Frank’s HIV-positive girlfriend Emily is too self-aware to complain. Everybody’s dying.