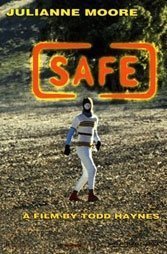 In the decade or so before 9/11, American filmmaking occasionally veered into paranormal territory, associating malaise and anxiety not so much with environmental woes or disease — the two most common triggers — but with a sense of deep inner oppression no house, home, luxury or entrenched affluence could chase away. Writer-director Todd Haynes’ chiller plowed that territory, and effectively so, in an eerie story about an late-1980s, AIDS-era L.A. homemaker named Carol White (Julianne Moore) who — bereft of intimacy — suddenly starts feeling unwell, afflicted by what was once called the vapors (repackaged as multiple chemical sensitivity).

She’s dazed, suffers nosebleeds, and her wifely duties — such as they are — are consumed by malaise. In a time of aerobics and cleansing, she’s come somehow de-cleansed, or so she comes to believe. Haynes trick, which follows in the tradition of Peter Weir’s early Australian apocalyptic oddities (“Picnic at Hanging Rock” and “The Last Wave”), is never to specify what’s gone wrong. Carol, a naïve prude, is all at once the victim of the mundanely surreal world around her. All her circumstances are coming undone.

This is woe’s storytelling in the years before falling towers took center stage, imposing literalism as never before. “Do you smell fumes?” asks a poster on Carol’s gym wall. She thinks she does. But no lifestyle or retreat can properly clear the fouled air, and that’s what Haynes tugs at adroitly in this overly long, sometimes tedious, but strangely urgent piece of filmmaking.

What might seem on the surface as a pro-environmental, anti-chemical, “allergic to the 20th-century” tract (with a wild swipe at the cult aspect of self-help) is really a more subtle, scary and journey into the recesses of paranoia and near-alien estrangement from self.