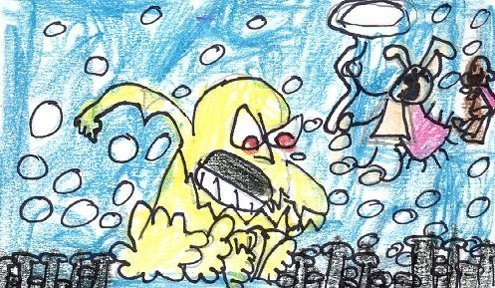 Why did you have to give me an Italian father? I just want to speak English.
G

et in your room,” I told my son Leo. He screamed and cried. I was furious. I knew that getting him out of my face was best for both of us. “And no more screens today!” I yelled, swallowing another pill and hoping its effects would wash over me fast. “Relax.” That’s the name of my herbal chill-out supplement.

I listened to the full-blown tantrum playing out behind the door. He was crying and shouting and throwing something. I wanted to choke him. My husband was riled up too.

Sometimes — and I’ve said this many times before — good parenting means listening to your instincts, and then doing the exact opposite.

A few minutes later, maybe thanks to the pills, or just because it was the opposite of my instinct, I entered the room.

I lowered my decibel level. I dulled my demeanor. I was composed.

Leo had again intentionally left his Italian language book at school. We’d had the same problem before winter break.

“You will bring your Italian book home every night!” I ordered him in December.

“Why did you have to marry an Italian?” he screamed back.

“Actually, we aren’t married.” Maybe I could go with legal misdirection.

I couldn’t. He came back with, “Why did you have to give me an Italian father? I just want to speak English.”

We’ve all heard about self-hating Jews but what about self-loathing Italians?

The day before the first incident I’d met with his homeroom teacher who explained that he’d thrown the book across the room in protest. She’d reprimanded him. After that, he promised to take the book home and never cause a scene again. It seemed like we understood the situation and we wished each other a good weekend.

But Mommy didn’t have a good weekend. When she went to retrieve the book from the bag, it wasn’t there. Mommy then lost it, called her son sneaky, and sent him packing to his room. That brought on the pill popping.

Back to the room, where I began climbing my way out of my parenting low point. “There are consequences to your actions,” I told Leo. “Now I’ll have to email your teacher and tell her that you deliberately disobeyed her.”

He was blinking back a fresh round of tears.

“Why Leo? Why would you do that?” I pleaded.

His blinking couldn’t stop the flood of tears. His lips trembled and quivered as he barely eked out the words:

“Because I’m not good at Italian. It’s so hard for me.”

Then he poured himself into my arms and sobbed. “I’m not good at anything, I wish I was never born.”

I felt sick to my stomach and broken hearted — mostly for him. Kids with learning differences aren’t stupid. Actually, they’re smart. Smart enough to know that their brain doesn’t function like everyone else’s. The risk is that their self-esteem suffers as a result. They begin to feel like losers and before long they behave like losers.

“I understand,” I replied. “I’m so sorry it is difficult.” This was the only thing I could tell him. I wanted him to know that he’d been heard.

But my job isn’t to throw pity parties. My job is to make him feel loved and supported, challenged but also successful.

I continued, “I know Italian is not easy. It’s not easy for me either. But we have to work. We don’t have to be the best. We do have to try our best.”

He listened more calmly. “Remember when you hated to read because it was so hard? But then you worked and worked and now you can read any Captain Underpants book.”

He looked at me and added, “And Super Diaper Baby.”

“And Super Diaper Baby.” I agreed. “You have to work 10 times harder than everybody, it’s true. But one day, this will make you stronger and better off than most.”

He cried in my arms again. But this time there was relief, relief that he’d expressed these bottled up emotions, and relief that his parents were no longer upset.

Five minutes later he came to me and asked, “Now can I get my screen privileges back?” I popped another pill and gave him 30 minutes on the iPad.