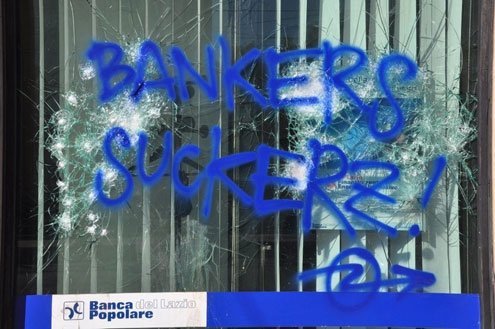 Banks were the target, but the rage spread. Photos by Mandy Ruggeri.
M

y neighborhood had become a war-zone. Charred dumpsters stood for once empty of trash. Cars squealed through an intersection with even more honking than usual, thanks to the notable absence of the traffic lights that had been up just a day earlier. Here and there, husks of burned-out cars stood haphazardly in the street, their innards splayed, metal frames bubbled, tottering in pools of shattered glass.

A bank’s glass windows were spider-webbed with cracks; someone had painted “BANKERS SUCKERZ!” on top in jubilant blue. The bank’s ATM, next to another shattered window, had been splashed with red paint, making it look from across the block as if it were dripping blood. Not that banks were the only target. Further down, a “Manpower” office was cordoned off with yellow tape; it had been bombed. The agency finds workers temporary jobs.

Then came the graffiti. Always a colorful part of Rome’s texture, now it was a scourge. Merde was scrawled on one building in blue and green, with arrows pointing to the Guardia di Finanza plaque above the door. Paint repudiations ran the gamut: “Fuck austerity.” “Fuck the state!” “Fight the law.” “Let’s go riot!” In a particularly pretty script, “Revolution.” Or my personal favorites, “meat is murder” and “go vegan,” scribbled across the storefront shutter of a macelleria.

Or the most telling of all, written by a particularly self-aware hoodlum: “XV OTTOBRE MMXI: SACCO DI ROMA.” “October 15, 2011: Sack of Rome.” And the barbarians would be…? Oh, that’s right. You.

The mess would have shocked me more had I not seen it begin the day before. A couple of hours after the demonstrations began, I headed to the Coliseum, just down the street from my house. As I walked down Via Labicana, the American Embassy’s warnings about the protest’s possible danger seemed far away. The protestors, many middle-aged, some youths, strolled up the largely vacant street, chatting. Only a few even carried signs.

Then I saw the smoke. It puffed up from the other side of the park as if the trees on the Colle Oppio were smokers exhaling. I learned later that cars had been set on fire on Via Cavour.

Standing at the Coliseum, the trickle of people I’d seen earlier turned into a torrent. Still, few carried signs. Fewer chanted. Most smiled and chatted. It was almost as if everyone in Rome had simply woken up this morning and decided it was a nice day for a walk along Via dei Fori Imperiali. A large truck went by, playing reggae music and selling beers for €3.50 to thirsty protestors. Next to me, an Italian smoked a pipe and held a newspaper under his arm, watching.

Further down the street, a line of police, helmeted and holding shields and guns, apparently kept the protest along its assigned path. Overkill, I thought to myself.

Some 45 minutes later, the river of protestors changed, as if someone had flipped a switch that morphed every chatting and smiling Italian into members of an intimidating group wearing a ski mask and hoods or motorino helmets. I shifted uncomfortably. Several hundred of them must have walked by, a solid bloc within the protest, the “black bloc,” whose tactics are confrontational (their clashes with police left more than 400 injured during the 2001 G8 Summit in Genoa).

As soon as they passed, the ear-splitting crack of an explosion. People near me shrieked. The corner I’d been standing that was crowded with observers emptied. “Che e’ successo?” a panicked Italian woman asked me. I didn’t know. But I knew it was time to go.

Heading up my street toward Piazza San Giovanni, something wasn’t right. I looked up, and directly on the other side of my building saw a column of thick smoke, building into sky where circling helicopters hovered overhead. Others next to me wrapped their faces in scarves to protect against the spreading smoke.

When I arrived at the piazza, a dozen police vans had just lurched into action. (Just? I thought to myself. The smoke must have been there for 10 minutes already). So had the piazza’s policemen, suddenly leaping to a jog, shields bouncing in front of them.

At the corner of Via Merulana and Via Manzoni, I saw why. Four cars were ablaze. Sirens wailed, people shouted. Explosions rocked the air from exploded engines or, I discovered later, pipe and cherry bombs. I’d never seen anything like it. And neither, from the horrified expressions on the faces of the protestors and passersby around me, had anyone else around me.

The next day, when the tear gas and water cannons subsided and the smoke cleared, the extent of the damage became clear. Preliminary estimates put it at €2 million, which seem low. At least 135 injured, some of whom lost their fingers from their own malfeasance. At least one near-death, a carabinieri whose van was set alight while he remained inside. And, most bizarrely of all, only 20 arrests. That last fact produced conspiracy theories: The government had planted the hoodlums to discredit the larger, 200,000-strong anti-banking system protests. It was all a setup.

The next day, as I walked through the aftermath, Italians stooped and poked at car carcasses and shook their heads at the graffiti. (Less tastefully, a British couple took the opportunity for a photo op, the man making a mock-horror Edvard Munch face as his wife happily snapped away). It was supposed to be just another protest. Another Saturday, another manfestazione. But the appalled expressions around me made it clear: This was not normal.

I turned back onto my street and kicked aside a stick, the same that the hoodlums used the day before to smash windows and terrorize the protestors and police who tried to stop them.

On my road, neighbors already had started painting over yesterday’s hate. Bright pink and orange paint stood out against pale peach walls like fresh scabs.

But if you looked closely, you could make out the epithets underneath.