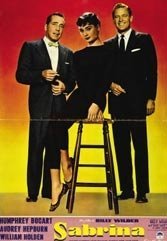 Ever wonder about the origin of Dustin Hoffman’s famous “plastics” remark in his “The Graduate” debut? Look no further than Wilder’s fluffy but clever romantic comedy. In it, two wealthy Long Island brothers, the Larrabees — Humphrey Bogart and William Holden — are by turn a workaholic businessman and a frivolous playboy. Holden is David, thrice-married, and Bogart Linus, a single-minded Wall Street spinster. It’s Linus who tells David he needs to marry again to seal a business deal concerning plastics.

The preamble matters because lurking in the background is Sabrina, the daughter of the family’s English-born chauffeur. Behold Audrey Hepburn supreme, and the real question is never whether she can win over these men but when. Sabrina already loves David, who at the start can’t see her from a hood ornament, while Linus, well; he’s too busy with commodities.

Good romantic comedies need a conceit, and Wilder’s sees pauper Sabrina sulk off to Paris for two years of cooking school, only to come back stylishly transformed. “Scrawny little girl” a thing of the past, guess who’s front and center? Except that David’s engaged and Linus needs the marriage to seal his plastics merger. He dupes “last of the romantics” Sabrina until…

Much of Wilder’s story is hopelessly hackneyed, but who cares? It’s a shoot-the-moon picture conjured from a time when boys, girls and romance stood frozen class in system realms, absent gender wars, at least in the movies. Here, the girl, Hepburn, leaves both boys mesmerized, never mind age differences. Many have been the stars and starlets since Hepburn’s halcyon days, but few have ever matched her style (she won a best actress Oscar for the role).

“Sabrina, Sabrina, where have you been all my life,” whispers a suddenly revived David.

But it’s Linus’ conniving if gently melancholy that gird the film’s second half, with Bogart deftly handling the real difficulties of being a smitten middle-aged man. And if you’re interested in early mobile phones, do check out Linus’ early into the film: it looks like a satellite on wheels