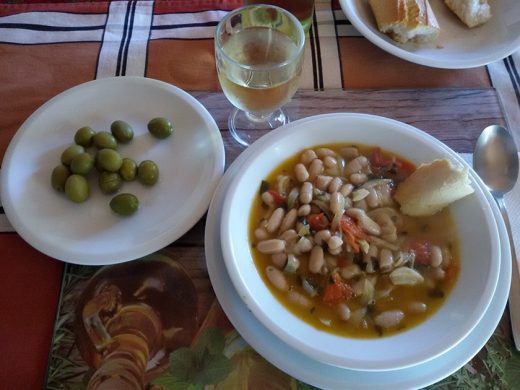 n times of crisis people have always been able to find unexpected solutions. In the past, and especially here, in southern Apulia, the solutions were ready at hand, since crisis was in some respects permanent. Over centuries, poverty and wars honed the ingenuity of our peasants who developed an unrivaled ability to make the best of whatever they could cultivate in their hard won lots of stony soil, or of the incredible variety of wild herbs and plants they could find foraging about the fields and the woods.

In her masterpiece “Honey from a Weed, fasting and feasting in Tuscany, Catalonia, the Cyclades and Apulia” (Prospect Books, 1986) British writer and journalist Patience Gray distilled a lifetime of food-knowledge, and of observations on the way of life led peasants in various northern Mediterranean countries. In her biography, “Fasting and Feasting, the Life of Visionary Food Writer Patience Gray” (Chelsea Green, 2017), Adam Federman revealed that Gray’s interest in food was sparked by food rationing in England during World War II. At the time, she and her children had fled London — under almost daily German bombing — to a safer shelter in the countryside. There, she learned to distinguish, and pick, edible mushrooms and wild herbs to add to meager war rations.

Of course, the coronavirus (COVID-19) is not World War II and there is little risk of being reduced to rationing, though some Italian supermarkets were literally, and irrationally, raided by madding crowds who in early March, before limitations were place on the number of shoppers allowed in one place at the same time, bought up whole shelves, as if the specter of famine loomed. In fairness, such dashing around has since been seen all over the West, as some cities have closed down most if not all commercial activity with only food sale exempted.

In a more rational approach, we should use this abundant free time, allowed by circulation restrictions, to live for a while in a less hurried way. With cinemas, theaters, discos, stadiums and all common meeting places closed throughout Italy (and Europe), reading and cooking could be two extremely beneficial activities. My daughter, who works in a major bookshop in Lecce, told me that there is already an increase in sales, which is very good news, and not only for the profits of bookshops owners and publishers. When people read, there is hope for the future. Didn’t you ever buy a book which you never read for lack of time? Well, there you are.

And what about cooking? Many of us know the countless ways in which pasta can be cooked. But what about aubergine, zucchini, artichokes, peppers (big green, yellow, or red, or thin horn shaped friggitelli for a delightful “peperonata” with tomatoes), peas, chick peas, beans, broad beans, wild chicory, field poppy, and all the local herbs that abound in the fields along country roads? How many of us have become used to buying tinned or precooked food, ready to use when we rush back home from work to a starving family? I was one of those people too.

When my wife suddenly died at 40 and I was left alone to feed our daughter of nine, I couldn’t boil an egg — and I hope my dear Alessandra will one day forgive me for all the rubbish I laid on our dishes. But I did remember with painful nostalgia what our grandmothers and my mother used to cook. I grew up in the 1950s and 60s and at home vegetables and pasta and were standard courses, and dried legumes were precious staple. We also ate meat and fish, of course, but not in the quantity, and certainly not with the frequency that later became common in Italy (often with unhealthy amounts of meat and fats).

Centuries of poverty and wars honed the ingenuity of Italian peasants, who developed an unrivaled ability to make the best of whatever they could cultivate.

So I started to ask around for recipes and advice, from relatives and more expert lady colleagues. Then I met Patience Gray, who had been living in a 17th– century masseria (a farm villa) in Salento since the early 1970s. She presented me with a signed copy of her invaluable book. And I discovered that the Greek fasolákia was exactly the way my wife’s grandmother Celeste had cooked haricot white beans. I also learned that chick peas can be cooked à la Catalan, and that I could retrieve from memory one of the flavors of my teens by frying wild poppy with chili pepper and black olives — very much as my mother often did for dinner in early spring. Just in case, you fry the plant, not the flower. I came to know about endless forgotten dishes devised by ancient peasant wisdom and carried forward through the centuries. Because, as Patience Gray wrote, “it was not necessarily the chefs of prelates and princes who invented dishes. Country people and fishermen created them, great chefs refined them and wrote them down.”

Every Italian region has a wealth of local recipes and culinary traditions. Cooking traditional dishes takes time. For instance, you must wash vegetables bought at the local market very carefully. The same holds true for the wild herbs foraged for in the fields. For a delicious soup, you must remember to put the dry beans in a pot with much cold water and a pinch of bicarbonate the night before cooking them, and “blanch” them in the morning, before adding the rest of the necessary soup ingredients. Grandmother would put white beans in an earthenware pot, set against the burning logs in the fireplace to slowly boil, stirring from time to time. Now, being forced to take refuge in our houses to escape this new plague, we have time, and for many this can be the first experience of this kind in their adult life. And maybe a unique one, because, after all, this period of forced inaction will fly by and we will all be back to what we consider “normal” life.

So let us use this time well. Let us dedicate at least part of the time to reading and cooking, but in a more leisurely way. Let us also listen to good music.

And my cooking suggestions do not refer only to vegetables and legumes. Have you ever tried Pollo alla Romana with the addition of mushrooms sautéed in butter (a variation of the well known pollo alla cacciatora)?

Or you can learn to produce an allioli, slowly pounding on the mortar all the ingredients, the perfume of garlic, parsley, olive oil, and breadcrumbs soaked in vinegar (or lemon as I prefer), inebriating you as you work — all this to dress a baked and boned gray mullet. Slow cooking brings with it a side benefit: it occasions conversation and laughing in the family, which has been shown to help strengthen our immune responses. No need, these days, to light a fire in the fireplace as my countrywomen did since Neolithic time. We all have a cooker of one kind of another. The difference is made by what we put on the burner or in the oven, and the care and love with which we tend the food we are providing for friends and loved ones, and for ourselves. Because cooking itself can be an act of love. And one of the healthiest acts humans have ever known.