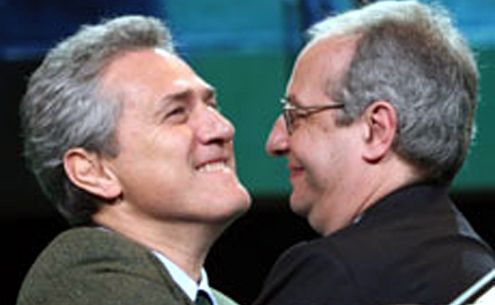 ix years ago a popular left-leaning mayor of Rome quit his job and went for the gold — which in Italy is the office of prime minister. At the time, he was 47, worldly, respected and supremely (if preeningly) self-confident. A few months later only his age remained untouched. A rightist coalition led by Silvio Berlusconi shattered former Mayor Francesco Rutelli’s “Ulivo” center-left coalition, effectively crippling a national political career once considered a sure thing.

Since 2001, Rutelli has remained in the Italian political mix — he’s been a minor party leader and a cabinet minister — but the expectations associated with his mayoral stint have long gone by the wayside. In Rome, mayors win or vanish.

Curious, then, that his one-time deputy and successor, Walter Veltroni, has now placed himself in an eerily similar position. Veltroni, who resigned the mayor’s job recently after a seven-year stint as successful as Rutelli’s, now leads the wobbly left in its latest tussle with Berlusconi. Some call it politics, others a suicide wish.

In fairness to the 52-year-old Veltroni, this wasn’t exactly his plan. The left’s playbook, dog-eared though it is, called for Romano Prodi’s coalition to stick around long enough for Veltroni to groom his fledgling Democratic Party and give it popular and institutional recognition outside Rome. When Prodi fell in January, Veltroni all but begged that national elections be put off, ostensibly until parliament enacted electoral reforms. The ageless Berlusconi, who had nothing to gain by waiting, rebuffed him. Elections are set for early next month.

Whatever his shortcomings, Berlusconi is an astute student of Italian chaos theory. He inserts himself into recurrence. In 2008, he senses the ides of 2001: it’s déjà vu all over again. Puns aside, he’s right.

Where Rutelli was hampered by overexposure and three years of dubious leftist rule (Berlusconi’s ascent came on the heels of Massimo d’Alema’s center-left collapse), Veltroni faces haphazard timing and a sense that the left’s best intentions are immutably fractured and unreliable, which Prodi’s migraine-inducing miseries highlighted.

To outsiders (and some Italians), this sound like so much garment district gossip, a clatter of names and situations known only to its yammering participants and groupies. Italian politics is very much the grand bazaar it’s often labeled.

What makes Veltroni’s bid somewhat interesting is Veltroni himself. He’s unabashedly pro-American. He compares Barack Obama to JFK — he jumped on the Obama bandwagon long before Iowa — and revels the politics of suspended disbelief. You can be an Italian politician without being a cliché, he seems to say. Or wish to. His campaign slogans urge voters to ignore party preferences in favor of national greater good which in an anti-utopian democracy, borders on the ironic.

Veltroni’s strategy is less clever than desperate. His party — garden-variety refried beans — is four months old. He can’t count on crossover votes, since few on the right forgive his communist past. The center-left is fresh from a querulous collapse with its former leader, Prodi, in grandfatherly semi-retirement (he’s the lame duck prime minister). Berlusconi, who refuses to acknowledge wrinkles or dissent, is beating the populist drum by promising to abolish property taxes. His rightist rivals, briefly contentious, again recognize him as their love-hate lightening rod. Put it all together and Veltroni trails by a Castelli kilometer without a Ducati in sight.

All of which raises the prospect (to some the specter) of Rutelli bis. Bis is skippy Italian slang for a double or repeat performance. It’s Latin hand-me-down. In the May 2001 vote, Berlusconi’s Casa della Liberta smacked down Rutelli’s Ulivo, gaining a commanding majority in both house of parliament. Within months, Rutelli was an afterthought. Berlusconi endured a full six-year term, a remarkable accomplishment for a deeply controversial figure.

Veltroni does have one thing going for him. He wrote the preface to the Italian edition of Obama’s autobiography “The Audacity of Hope” (L’audacia della speranza). “In a country that seems tired of bitterly fought ideological battles [Obama] seeks what unites, not what divides,” gushed Veltroni. Should he lose and Obama win, he stands to gain moral royalties, not to mention additional Washington street cred. But as things stand now, little else.