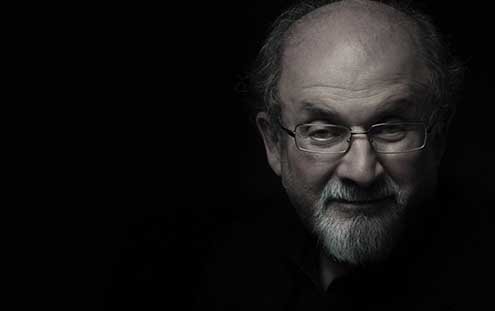 Salman Rushdie's latest novel is "The Golden House," and it returns to his nesting ground, Manhattan.
O

ver the last decade, Salman Rushdie’s novels drifted deep into magic and myth. “The Enchantress of Florence” (2008) offered princes and emperors while “Two Years Eight Months and Twenty-Eight Nights” (2015) feasted on genies. It was a departure for an author who’d always paid attention to headlines and urban realism.

But in his 16th novel, “The Golden House” (Jonathan Cape: London), the magical realm recedes and the Anglo-Indian writer’s instead offers up a ferociously effective social satire very much grounded in the Trump-era present. It’s an ambitious work that uses metaphor to propose a parallel decline in both the public and private spheres of life.

In “The Golden House,” the eight years of the Barack Obama presidency overlap with the life and times one Nero J. Golden and that of his three adult sons, all freshly arrived from Bombay to Manhattan with new names, the past behind them, or so they hope.

Early on, the narration is in the third person plural, a “we” who watches intrigued from his privileged back window as the Golden clan settles into the mansion, “the grandest in our neighborhood,” for years occupied only by live-in guardian-caretakers.

With its sprawling semiprivate grounds and gardens, the home is lifted straight from Manhattan’s MacDougal-Sullivan Gardens district, a cloistered slice of otherwise busy Greenwich Village. Hidden from view, the mansion is accessible only to residents with homes whose small backyards spill onto a large communal green arrayed with trees, shrubs and benches.

Rushdie’s choice of this little-known setting is pure genius. Since the narrator’s family home is among these upscale houses, he has a perfect view of the newcomers and a chance to meet them on park benches, eventually making for confessional friendships, and even winning an invitation to move into the Golden home.

The family is determined to fit into the New York social fabric around it. Nero wastes no time reminding his sons that they they’ve done more than just change country, home and name. “We are make-believe people, frauds, reinventions, shapeshifters, which is to say, Americans.”

The narrator will also shift identity, the “we” become “I” in the person aspiring young filmmaker named René. His film studies professor wants him to produce a screenplay thesis with some “blood” in it and here before him are the Golden family’s dramatic actors.

Nero is a vivid figure portrayed as a business wheeler-dealer who wastes no time throwing celebrity-heavy parties. All the while his sons struggle privately with psychological issues that a new passport can’t fix.

Nero’s decadent Bombay background casts a pall on his family’s ambitions. He worked with global drug cartels and arms dealers for years before their increasingly murderous volatility frightened him into hatching his identity-changing Manhattan transfer.

Nero’s sons get to choose their own names so long as they’re drawn from ancient Rome. The eldest picks Petronius, appropriate enough for an agoraphobic video games genius who likes dressing elegantly. The middle son chooses Apuleius, in keeping with his artistic talents. The youngest is D (Dionysius), reflecting his nightmarish bisexual tensions. All three are plagued by identity questions.

Though the plot soon grows thick, Rushdie brilliantly keeps the reader at the heart of the family’s struggles, blending in a large cast of fascinating and credible characters, many drawn from his already multicultural cauldron.

References and allusions are everywhere as Rushdie tosses in Broadway musicals, cult cinema, Indian mythology, comic strips, ancient Roman history, and a sampling of literary quotes. This dazzling decor cleverly mocks global “connectivity,” with Rushdie supplying the sea of random bytes. The abundance grows irritating only when its obscures Rushdie’s bleak analysis of the reinvention process the Golden family tries to embody but can’t. In the end, its members have much baggage to pull it off.

If the novel has a weakness it’s Rushdie tendency to overdo and overstretch. Much as he insists his story is also about nature of evil, it never quite gets there. Even the introduction of uncouth Gary “Green” Gwynplaine, a rich politician with green hair who calls himself the “Joker” and decides to run for president fails to carry the metaphorical weight needed to suggest all things will fall apart, as eventually they do here.

The best advice in reading this novel might be to follow René’s ongoing screenplay. With cinematic swiftness, it shifts angles, stops the narration with the word “Cut,” and smoothly blends Bombay backstories that gives heft to these adopted New Yorkers and their America. In fact, Rushdie’s true triumph is his poignant dissection of the complexities of mind and heart. On a corrupt planet — “our degraded world” — and in America —”a lurid graphic novel”— finding a pure vision of the “I” in “identity” can be impossible. “Why even try to understand the human condition if humanity revealed itself as grotesque, dark, not worth it.”

If Rushdie’s political “Joker” never rises above comic strip level, his fully formed characters are touching and his prose exuberant, making “The Golden House” a vibrant and worthwhile page-turner.