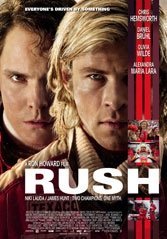 Rush: Ron Howard is at his best in a movie about a memorable Formula One duel.

The epic fight for the 1976 Formula One racing title between Austrian rationalist Niki Lauda and English maverick James Hunt remains among the most riveting and personal fights-to-the-finish in sports history. Director Ron Howard captures its pace and friction with a superb, gristle-free movie that combines the best of Hollywood, with its frenetic pace, and European-styled dramatic portrayal. The result is a compelling portrait of men and machines.

The film’s opening and closing is narrated by Lauda (Barcelona-born German Daniel Brühl), whose uncanny physical and psycho resemblance to the real Lauda is matched only by Australian Chris Hemsworth’s similarly uncanny embodying of the ferocious and hedonistic Hunt. Assisted by Peter Morgan’s (“The Queen,” “Frost/Nixon”) smart script, Howard dispenses with sentimental preambles and unnecessary asides. We’re immediately introduced to wet-behind-the-ears competitors, Lauda the “happiness is the enemy” pragmatist and Hunt the freewheeling romantic who sees himself as driving “a little coffin surrounded by high-octane fuel” (an apt description for F1 cars). Hunt labels Lauda “my ratty little friend”; laconic Lauda responds by calling him as asshole, the label he pinned on most who didn’t see things his way.

But it was Lauda, driving for Ferrari, who first clawed his way to the top, winning the 1975 world title. Howard instead zeroes in on 1976, when Hunt, in a McLaren, took advantage of a near-fatal Lauda crash to make his way up the ladder. Lauda, who suffered third degree burns, returned to the cockpit in 42 days, a feat of will that mocks a far more cautious 21st-century.

Howard adds the necessary trimmings — a strong score and credible supporting women — to what is a thoroughly male story. “I’m a serious guy,” says the humorless Lauda early on, and he was, and so is director Howard, who at his best is as good as they come, and he is here.

Hunt won only that one world title and died at 45 in 1993 after short and intensely lived life. Lauda won three titles overall and remains a leading figure in the F1 world.