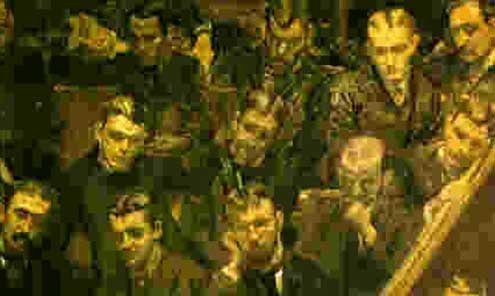 Trying to determine what others expect from you in the medical arena can be hard work.
S

ome people compare starting a new clinical rotation in medical school – something you do every six or eight weeks for an entire year – to starting a new job. A job you’ve never done, and one you feel wholly unprepared for. I liken the experience to being dropped into the middle of a novel. Dialogue explodes around you. But the speech lacks context and you struggle to make any sense of the words. Characters fall in love, have sex, shoot each other, but you can’t always tell the good guys and bad guys apart. For heaven’s sake, you don’t even know where you are. Russia? Iowa? The moon?

That’s how I felt when I started my inpatient psychiatry rotation on a summer Monday last year. I arrived promptly on the unit at 8:20 a.m. as I’d been instructed. I knew the names of the attending, resident, and medical student I would be working with, but not their appearance or where I was expected to meet them. I sheepishly hung out with a kind, chatty nurse until the 8:30 a.m. team meeting – a meeting I had no idea I was supposed to attend until the friendly nurse told me. A dozen or so of us entered a room and sat or stood around a big table to discuss general issues – safety concerns, upcoming discharges, new admissions, staff absences, special activities.

After this combined meeting, we had another meeting just with my team to discuss more specific updates on our own patients. Since I was new, those present introduced themselves. Overwhelmed by it all, I promptly forgot most of their names and their roles.

I got slight comfort in telling myself I’d pick up the details after everything settled down.

I noticed that the woman running the meeting had two binders. One bore the name of my attending psychiatrist, the other the name of a different attending. Not all the patients were covered by my team, which made me wonder where exactly they wanted my focus.

As the meeting progressed, with notes and updates on specific patients, I noticed that my medical school colleague, who was sitting next to me, occasionally scribbled a few notes. “Should I be taking notes?” I wondered.

I didn’t want to be perceived as not paying attention, but I had no idea who these patients were, which ones (if any) were my responsibility, and which updates mattered.

One of these updates might consist of something like this: “On Saturday, Jane Doe took her medications. She spent most of the day with her family. She expressed her needs appropriately. She slept well.”

That sounds bland, but perhaps this was the first day Ms. Doe had agreed to take her medications. Perhaps sleeping well was a major improvement for her. I just didn’t know.

With patient names and behaviors swirling in my head, I did my best to keep the confusion at bay, reminding myself that this was my first day, my first hour. I couldn’t be expected to keep things straight. Not yet.

Then the team resident, my classmate, and I talked individually with patients in one of the unit’s small, private meeting rooms. The resident immediately launched into questions. Sleep? Appetite? Mood? Hallucinations or delusions? Medication side effects? Thoughts of hurting yourself or others?

Between patients, my classmate tried to give me a brief synopsis of the next patient: diagnosis, treatment plan.

With only that to go on, I struggled to make sense of the encounters. The journalist in me cried out for each patient’s fuller story. Understanding the past would help me understand their present, and their prognosis.

As the patients answered the resident’s questions, in my own mind the replies only provoked more questions. One patient made a vague reference to a brutal childhood trauma. Another hinted at magical powers. How could I not want to know more?

Making matters even more complicated I had little understanding of what my supervisors (the psychiatry resident and attending) expected of me for the next four weeks. The medical student told me what he’d been doing – interviewing two of our five patients one-on-one daily, and writing a progress note on each. But more concrete information was hard to find.

I finally went to the source, asking the resident what her expectations were. She told me to do essentially what my classmate was doing — pick a patient or two, spend some extra time with them, and write my own notes. I had figured as much, but now it was official.

I selected my patients and dug into their medical records, combing through the notes in each person’s electronic chart. I was back to reading the novel, starting at the beginning and working my way forward. I began with each patient’s presentation to the psychiatric emergency department. That gave me a sense of how they were when they first came to the hospital compared to how they were now. I then moved to the initial evaluation note from the psychiatric unit (where I was now working). These two comprehensive notes helped me understand each patient’s present psychiatric illness, as well as past psychiatric history, medical history, family situation, and other life factors. I also read what are called “collateral” notes. These are conversations between a medical practitioner (often a medical student) and someone else in the patient’s life — a spouse, friend, psychiatrist, therapist, or caseworker, for example. They provide an outsider perspective on how the patient’s current condition compares to their norm. Last, I read daily progress notes, finishing with the one written that morning. These brief and focused progress notes told the story of the patient’s day-by-day existence on the inpatient psychiatric unit. How they were eating, sleeping, behaving, and overall living while in the hospital. These daily updates clued me into whether someone’s delusions or insomnia had improved, for example, or whether they were tolerating an increased dose of a medication.

At the end of that first day, I was still in the middle of the novel, on page 200 or so. But I’d gone back and at least skimmed the first 199 pages. And with that background, I was now ready to move on to the next chapter: the next day.