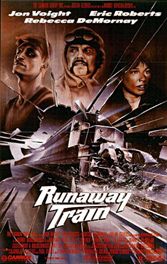 Talk about change of pace. Here’s a lights out thriller made by a Russian from a Japanese screenplay that fits Jon Voight like a brambled glove.

Two escaped maximum-security inmates (Voight is Oscar; Eric Roberts is Buck) and a woman conductor (Sara; Rebecca De Mornay) are trapped on an otherwise deserted runaway train hurtling through Alaska. The breaks are shot. Voight is ruthless; Roberts compliant; De Mornay a humanizing afterthought. It’s easy enough to bash testosterone-laden flicks, but this one is fierce, smart, and maipulates train, weather, and characters to existential effect. People are as out of control as the machines they ride.

Though Ryuzo Kikushima gets credit for the script, the idea was Akira Kurosawa’s — he of “Rashômon” fame. Moscow-born Andrei Konchalovsky directed (he later made the kitschy-cute “Tango & Cash,” with Stallone and Kurt Russell).