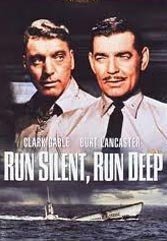 Submarine movies about real wars are a nearly extinct species. But when they flourished they always represented a genre unto themselves, ritualistic, tightly focused, and supremely attentive to the hormonal details of male loyalty. Director Robert Wise’s film is no exception and stands tall in a small pantheon of such films (Wolfgang Peterson’s 1981″Das Boot” may be the best of all).

P.J. “Rich” Richardson (Clarke Gable) commands a submarine sunk by a marauding Japanese destroyer in the Bungo Straits off the coast of Japan. A year later, while on desk duty in Pearl Harbor, he requests and gets command of the USS Nerka on what is clearly a mission to avenge his lost sub and make amends for flawed strategy. But his appointment undoes the hopes of executive officer Jim Bledsoe (Burt Lancaster) who fully planned to captain the Nerka. Bledsoe is unhappy, as is the crew, and the atmosphere tense. What follows are relentless drills and standoff between the Gable and Lancaster, whose star power keeps the movie alive.

By the time the Nerka makes it into Japanese waters, Wise to turn his full attention to the cat-and-mouse game of submarine warfare. The primitive special effects remain brilliant, as does conflict viewed through facial expressions, the opening and closing of hatches, sweat patches, the tracking of torpedoes, and rising claustrophobia. Rich wants to try a novel style of attack; Bledsoe resists but obeys, coming around in the end.

Gable and Lancaster do what they do best, adhere to a code of stoicism and bonding that brooks little dissent and makes for a straight-arrow 90 minutes. The film was loosely adapted from a book by brilliant naval writer Edward L. Beach, a Navy submarine commander in his own right. Wise, meanwhile, turned to another genre: his next major project was “West Side Story.”