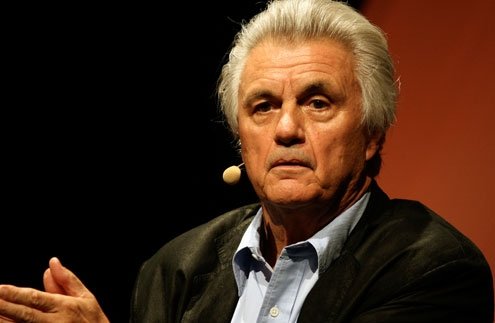 Irving is obsessed with wonderful people-tales.
B

eing in her mid-80s, with wild hair and plenty of heft, slack-jeaned Six-Pack Pam figures she’s “sort of a back door person.”

In John Irving’s eighth novel, “Last Night in Twisted River.” (London: Black Swan, 2010) he pushes his tragicomic talents toward the era-defining American epic. While sticking with the likes of Pam — eccentric, back door and back alley characters he claims as his territory.

Irving’s attracted to the disenfranchised class, hard-living and loving “rugged individualists.” (Logger Ketchum has a mangled hand and a livid scar running across his forehead.) Roles like these have been stock figures in American literary mythology. Today, they’re the guys who drive rusted pickup trucks, and the women who wash customer dishes in back kitchens.

Surely they have hardwired connection to their era. But… luckily for reader fun, unluckily for author ambition, Irving keeps his characters pretty far off center stage, and definitely offbeat.

Take Injun Jane, Dominic’s secret camp lover. Also one of this book’s (too?) many, monumentally endowed females. “Massive hips and breasts, a ton of coal black hair in one thick braid.” One night in Twisted River, her heavy-footed approach to Dominic’s bedroom wakes 12-year-old Danny. Frightened he grabs a cook’s skillet as weapon, and finds an unbraided, huge, hairy creature in Dad’s room. It’s a bear! (Is there an Irving novel without one?) Danny skillet-bashes Jane’s forehead.

Dead Jane had been living with Sheriff Carl. As predictably eccentric as any Irving character, he’ll hunt the pair for five decades.

The morning after Injun’s death, Dominic and Danny are on the lam. With shove from pal Ketchum. A shrewd adviser and fierce opinionist. The only person who’ll know their constantly shifting names and locations. As Irving’s frontier-voiced Greek chorus, his letters, fax, and phone calls alert over years to Carl-sightings. They also offer raging political comments on the developing era. A lot of beating around the Bush (George W.). Only in later, 9/11 pages, does Irving’s large cast momentarily join the Ketchum chorus. And here’s where Irving missed a huge chance to connect era and people. For despite all the hugely detailed deaths conjured in this novel, not one is a 9/11 fallout.

Irving’s more obsessed with his wonderful people-tales. As father and son shift hideouts in the North Eastern states, chef Dad follows the new social ladder, from logger’s bacon and taters to upscale droplets of mousse on baby veg. What reader salivating over Dad’s recipes will complain that the author is drifting?

At least he also drifts to a scrumptious Toronto bistro. Of course Canada’s also a logical finale for this work. As Ketchum insists: it should offer a choice opp for distanced reflection on where the U.S. is heading

But few Canada reflections link to the U.S. socio/political scene. Seems son Danny is now a famous author, and happens to have written this very novel! So, living in Canada, Danny/Irving indulge long ruminations on life vs. its fictional versions. Danny has a dead son, a walk-away wife, and a list of lost loves.

By now the author’s really got a lot on his plate. So does the reader.

To help the latter along, some pretty serious business — love, death, loss — mark all the innumerable plot threads. Yet, dealing with death, Irving’s own tragic-comic gift shatters any unity of effect. Because this writer’s dead-serious prose shocks the reader… into laughter. Irving’s so good at death scenes they’re paradoxically pleasurable. On page one watch young Angel Pope drowning in a river drive. It reads like ballet choreography. While Angel slips off floating logs, “a swift carpet of them covers him completely.” As in his name-making novel, “The World According to Garp,” Irving creates a sympatico cast, then kills them off in loving, brusque — and brisk — grotesque.

But brisk indeed. This River plot breaks speed records, even through 658 pages. As Irving takes us from the innocence of a hardscrabble, New England logging camp, to the complex days of post 9/11. With a cook, a rough logger and a craft-absorbed writer as commentators

Is that a lot to blend, even in twisty, fast-flowing prose? Yes. And it’s the epic ambition that gets shortchanged.

Luckily, though, this novel is lots more than its parts. Irving’s forged a dynamic tale. Of love and loss, and wonderfully humane characters.