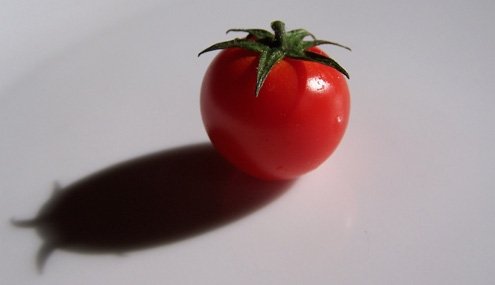 The tomato hasn't always had it easy — not even in Italy. Photos by Judy Witts.
S

ummer in Italy is red. Late spring sees markets fill up with ripe tomatoes ideal for an insalata caprese (with mozzarella) or a plate of the naked fruit itself dressed in extra virgin olive oil with a little salt.

Whether to use tomatoes for salads or sauces seems like a no-brainer. The answer is both, right?

Not quite, because not all tomatoes are created equal.

Greener tomatoes tend to be on the tart side and fit better with salads. Riper red tomatoes are best used for cooking and sauce (Italy’s staple tomato sauce, pomarola, depends on them).

Here’s a list of Italian tomatoes and how I use them, with some recipes to go with them. It’s not gospel, but it might help you with history and context.

— Cuore di Bue A salad tomato, this one is huge, wrinkly, flavorful, and tinged slightly green. Its acidity is fabulous with greens.

— Camone Another adored “green,” the camone is dark and hails from Sardinia and Sicily. I use it to make basil pasta sauce and the green tomato preserves I serve with cheeses.

— Costoluto Fiorentino This one looks like a small red pumpkin and is often grown in Sicily. It’s best suited to sauces because of the high ratio of seeds to liquid.

— San Marzano Italy’s most famous plum tomato, you’ll find the San Marzano in most canned sauces because it’s available all year round. It’s also the essential “red gold””ingredient in true Pizza Napolitano. Grown near Naples, its smooth skin permits easy peeling. August, when it’s at its ripest and must abundant, is canning time. It’s a DOP product (quality protected and ensured).

— Pendolino Sold while still on the branch, this tomato was traditionally hung under stairs to dry naturally for use later in the year — the first “dried” tomato. The pendolino is used to produce conserva, sun-dried tomato paste. The tomato puree is spread on special large clay plates or trays and stirred daily to let water evaporate. When the paste is ready it’s covered in oil until ready to use.

As nice as all this sounds, the tomato hasn’t always had it easy.

The Spanish brought the fruit to Europe after its discovery in the Americas. At first it was considered poisonous, after that an aphrodisiac. No one was quite sure what to make of it, let alone how to use it. The first written recipes mentioning the tomato — in stews — date from the 17th century.

Now, it’s synonymous with Mediterranean cooking and has hundreds of applications.

Among the simplest is ripe red tomato with bread. It’s cut in half and rubbed on a piece of country-style bread, providing a typical afternoon snack for Italian children, pane e pomodoro.

Toast the bread, rub it with garlic, and top it with chopped tomato and you get bruschetta (remember, in Italy the “ch” gets “ck” treatment, more like “bruscketta” than “brushetta”). In Spain it’s called pan con tomate and is served with ham as part of the tapas table.

In Naples, there’s a ring-shaped dried roll called a fresella, soaked first in water with vinegar, then topped with chopped seeded tomatoes, and drizzled with olive oil, and garnished with torn basil leaves and salted to taste.

I should also mention Acqua-Sale, a summer soup (a “white gazpacho”) taught to me by a student from a Puglia family recipe. In a bowl of ice water, add chopped tomatoes, cucumber cubes, chopped red onion, and oregano. Then drizzle in extra virgin olive oil, red wine vinegar, and garnish with some croutons. Try it in a Martini glasses to start a meal.

Though served as a vegetable, tomatoes are fruits. I recently saw candied tomatoes in the dried fruit section of the Central Market in Florence. I also tasted a dessert bruschetta in Puglia. The chef of “Il Poeto Contadino” in Alberobello, toasted a piece of pound cake for the bread, then hollowed out a tomato and poached in a simple syrup and filled with raisins and orange rinds and accompanied it all with a basil sorbet.

Preserve some of your summer tomatoes for use later in the year. You’ll thank me for reminding you.

My friend Stefano created this recipe last year. I pass it on as I wrote it down.

He harvested Pomodori Fiorentini, an heirloom tomato used for sauces. He cut them in half, width-wise, and sautéed them in a non-stick skillet, with a pinch of salt and 1/2 cup of hot water.

When the tomatoes seemed cooked, he flipped them over and chopped them up lightly with a wooden spatula and let them cook more. He then added torn basil and at the very end raw garlic slices. Later, he mixed in raw DeCecco linguine.

Then, another 1/4 cup of hot water (salted) until the pasta was cooked. He stirred (as with risotto) to let the pasta absorb the sauce, adding water as needed.

Cut the top third off the tomatoes.

Scoop out and the seeds and pulp, chop, and place in a small bowl.

Fill tomatoes 2/3 full with the rice mixture and place in a baking dish, add 1/2 cup of water and bake for 30-40 minutes at 350 until the rice is cooked. Serve at room temperature.

Slice the tomatoes in half lengthwise and then make thin slices.

Slice the garlic and place in skillet with olive oil.

Cook over high heat; when garlic is golden add tomatoes. (Tip: By putting the garlic into cold oil, then turning on the heat, you can better control the cooking time. Also, by slicing the garlic instead of mincing it, the larger pieces take longer to cook.)

Stir to get the tomatoes covered in oil and to really start to let them caramelize!

Add torn basil and salt. Turn down heat to medium and let cook until the tomatoes fall apart.

Cook pasta in salted boiling water and save some of the water to thin the sauce before you drain the pasta. Add the cooked pasta to the sauce and heat together.

The green tomato sauce is like a savory confit of tomatoes. It is also great with chucks of Parmesan cheese as an appetizer or served with roasted meats.

Soak the sliced stale bread in cold water for 10 minutes. Squeeze out the water and crumble the bread into a serving bowl.

Serve with olive oil, vinegar, and salt on the side.

Note: Florentines consider salt-free bread essential to panzanella (they produce their bread without salt, balancing this with heavy salt in their dishes). Also, use bread that actually goes stale. Do not use the kind with preservatives! Slice the bread thickly and let it dry. Don’t save it in plastic or the bread will mold. It needs to crumble after moistening, not form bread balls. Its texture when crumbled should resemble couscous. In fact, make a point of trying this recipe substituting couscous!