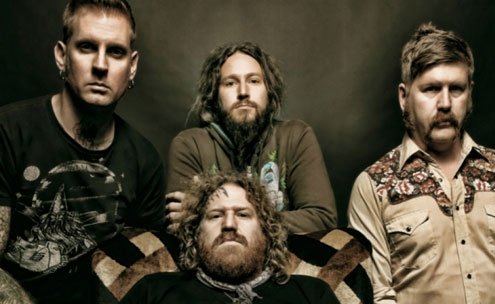 ew contemporary rock bands inspire the reverence and devotion enjoyed by Atlanta’s Mastodon. The adulation has been well earned: 2002’s Remission and 2004’s Leviathan are modern classics that acted as bridges from the metal world to the rest of the rock landscape at a time when that wasn’t an easy sell (thanks to the unloved nü-metal hangover). They were necessary ambassadors.

The quartet’s first two records were at once exacting and high-minded; Remission used fire as a theme; Leviathan dug into Melville’s Moby Dick. But as time went on, it became increasingly clear that the band had its own prog-rock agenda. The arc was in place for 2006’s Blood Mountain, a sprawling album with a three-headed deer on the cover that represented the group’s “earth element.” The absurdity peaked with 2009’s bloated Crack the Skye. Though 2011’s The Hunter made concessions to more traditional rock, noodling aimlessness lingered.

Once More ‘Round the Sun (Reprise), the band’s sixth album, comes as a more formidable corrective. It is more focused and efficient. The group has become acutely aware of a sound they long worked around but not necessarily toward.

Remission opened with a track called “Crusher Destroyer”; Once More ‘Round the Sun opens with “Tread Lightly.” That’s a one-sentence summary of where Mastodon has come in a dozen years. What’s important here, however, is that the focus of the group has moved away from outright “metal” overtures and unwieldy prog “explorations” and more toward laser-sharp pop songwriting. As Once More ‘Round the Sun shows, they’re still capable. Give a listen to “The Motherload” or the “Ember City” for proof as bassist Troy Sanders sings the hook. These are tracks that are technically proficient but would still work on modern rock radio. You can even sing along to it if you want.

Technical proficiency and the band’s deep talent mean that you’ll still get moments where guitar tablature booklets come in handy. Future metal drummers will have a reason to grovel at the likes of “High Road” and “Chimes at Midnight.” Guitarist Brent Hinds and drummer Brann Dailor are as sharp as they have ever been. Most of these tracks are accessible. They’re songs you might convince someone who isn’t into metal or even modern radio rock to listen to again.

Some of the crossover appeal is the work of producer Nick Raskulinecz, a guy who caught his biggest break with The Foo Fighters and has also handled Marilyn Manson, the Deftones, Rush, Ash, and other big-sounding artists. Mastodon has always had a natural flair for sounding big.

Pacing is also important. Though longer than either Crack the Skye or The Hunter, Once More ‘Round the Sun breaks up long songs with shorter ones and leaves the longest track, “Diamond in the Witch House,” as the album’s seven-minute coup de grâce. As the album’s conclusion, it opens with an acoustic guitar and escalates to an immodest conclusion. Interestingly, it fits right in on a record whose ambitions remain comparatively modest. This isn’t an album about whale-hunting or natural elements.

In fact, guitarist Bill Kelliher has said that the theme of Once More ‘Round the Sun is death. Few things subject are more imposing than mortality, but Mastodon tackles it without going over the top — a surprising development for both band and listener.

And while the mortality theme may apply to the music, it doesn’t to the band. Though Mastodon has evolved naturally, aging away from their early growl and fury, they sound more competent and focused than ever, which Once More ‘Round the Sun proves in convincing fashion.