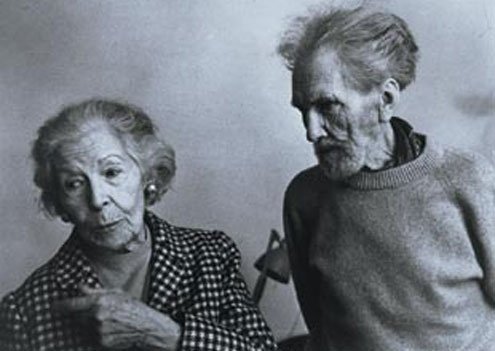 lga Rudge was poet Ezra Pound’s companion for half-a-century. She met the Idaho-born writer in Paris in 1920 and remained at his side in Fascist Italy, where before and during World War II he made radio broadcasts on behalf of Benito Mussolini’s regime.

In 1945, Pound was arrested for treason by U.S. occupation forces and transported to the United States where he was ruled unfit to stand trial. Confined to St. Elizabeths mental hospital in Washington, D.C., he was declared “incurably insane” in 1958 and allowed to return to Italy. He died at his home in Rapallo, on the Ligurian coast, in 1972.

A mercurial figure, Pound put a indelible mark on modern literature. Some consider him the father of literary modernism. He edited T.S. Eliot’s “The Waste Land,” striking out entire sections. Eliot took his suggestions and dedicated the completed version to Pound, calling him il miglior fabbro, literally “the best smithy.” Pound took “a jumble of good and bad passages” and made a poem, said Eliot.

Pound, born Ezra Weston Loomis Pound, began his European odyssey in London in 1911, where he typed manuscripts for W.B. Yeats. He then moved to Paris, forging ties with avant-garde artists including James Joyce, and also meeting violinist Rudge for the first time. He raged against the period’s florid prose and urged writers to get to the point, or to make one, later coining the seminal phrase, “Make it new.” He probed Sanskrit, Japanese haiku, and Chinese calligraphy and applied their condensing lessons to English. Emblematic was the two-line poem “In a Station of the Metro,” written in 1919: “The apparition of these faces in the crowd; Petals on a wet, black bough.”

Pound settled in Rapallo near Genoa in 1924 and fell under the spell of pop economics. Mussolini’s rapid ascent fascinated him; in it, he saw modernity. This led to ill-fated “cultural” broadcasts on behalf of Fascist Radio Roma. With them came inbuilt anti-Semitism. He denounced the Western central banking system — which he said impoverished culture — and assailed usury, blaming Jews for its growth. Yet his tone was more idealistic than political. In the “Pisan Cantos,” written while in military detention, he anticipated “No-global” positions. “Look, if you can, at St. Peter’s/Look at the Manchester slums, look at the Brazilian coffee/or Chilean nitrates.” Most of the “Pisan Cantos” (Pound was held for 25 days in a cage) were scrawled on hoarded shreds of paper. “I lost my center fighting the world,” he wrote in one Canto.

Critics still debate Pound’s legacy. Most concede he helped propel literature past the conceits of Edwardian-era overwriting. Some insist his Fascist sympathies and treason sentence brought him undeserved fame. In 1949, a year into his confinement for insanity, Pound received the Library of Congress’ first Bollingen Prize for poetry. In the 1950s, poets Wallace Stevens, William Carlos Williams, and W.H. Auden also received the award.

Pound’s companion Rudge, who died in 1996 at 100, began her lifelong affair with the poet while he was married to British artist Dorothy Shakespear. Rudge had a daughter by him, Mary, though Pound never dissolved his marriage. An accomplished concert violinist from Youngstown, Ohio, Rudge was a passionate apologist for Pound, to whom she read aloud in his later years.

The following conversation — extracts from a daylong session in November 1977 — was recorded at her Calle Querini, Venice home. Rudge punctuated her remarks with, “Capito!” [“Do you understand!”], “Dash it all,” “Look here,” and “You see what I mean?”

Pound and Rudge are buried in Venice’s San Michele cemetery.

Did you get the sense — ever — that Pound worshipped Mussolini?

There was absolutely no adulation. Of course he [Pound] was interested in meeting him [Mussolini]. You’d have to pretend to be some sort of philosopher who has no interest in the world, someone above everything, not to want to know more. But it was curiosity.

So he was later disillusioned.

He never had any illusions with Mussolini. I think he may have had some about the New Deal. He was interested in that and thought it might work. It was never that way over fascism. If Pound was a Fascist he would have had a party card [tessera]. He could have gone around flashing it and saying, “Look here.” No one knows that Ezra Pound didn’t know that fascism existed until very late. He was involved with Sanskrit and poems. He was living as a foreigner in a foreign country and wasn’t paying the slightest attention to politics. He was interested in Cavalcanti and Vivaldi. I remember in 1925 in Rapallo, Mussolini was coming to meet [British Prime Minister Neville] Chamberlain. So I said, “Oh, Mussolini’s arriving and everyone’s going to see him. I’m going down.” And Ezra wouldn’t even go to the end of the stairs to see the procession.

But what about the radio broadcasts?

He did them of his own volition. He did the radio because he’d started doing it before the war. He had tried to get what he had off his chest at his own expense in 1939, when he went to the States. The result was that he was made fun of. He was so much out of things that maybe he was wrong to do the radio here. But it was his damned right as an American to shoot off his mouth if he wanted to. They called it “the regime’s” radio, but wasn’t British radio “the regime’s” radio? All of it, the BBC included, it was all the same thing. Why don’t they see that Pound wasn’t weighing in. He wasn’t trying to make a career [from broadcasting]. For heaven’s sake, he never even owned a radio!

And the anti-Semitism charges?

They’ll always pick on him, but I know he wasn’t an anti-Semite. Not the way he’s been painted. It’s false and stupid. As a Catholic, Ezra was very much against the Hebrew religion. He was very Christian, New Testament. But that isn’t anti-Semitism. People like [the late American poet] Alan Ginsberg had the damn cheek to whitewash Ezra by saying his anti-Semitism was just his “bourgeois upbringing.” That misses the point. I know perfectly well that an ambitious young man of the period who was going for poetry would not have called himself Ezra Pound if he was an anti-Semite. He would have been E. Loomis Pound, in the American fashion, or Loomis Pound. But “A lume spento” [Pound’s first poetry chapbook] is published as Ezra Pound, and he stuck to that. And he spoke on the radio as Ezra Pound.

Look, let me tell you something else. There was that ship in 1939 [the SS St. Louis] with German Jews trying to get out of Germany that no one would grant a harbor to, including the United States. Now, tell me this: Where were the headlines in the U.S. newspapers at that time? When they could have saved the lives of those damned, poor people.

Why such words as kike?

He stuck his neck out. But I’ll also tell you that I came from a good family in Ohio and my reasonably-educated father wouldn’t have hesitated to say kike, Yid, frog, hunky, for any person who wasn’t… That was the slang. My mother was picked on because she sang in a Jewish synagogue. There was prejudice. [T.S.] Eliot was anti-Semitic in a way Pound was not, which made it awkward for [Eliot] when Pound was put away. Eliot may have been expressing the opinion of his intellectual class, the snobbery about “aliens,” but that’s what it was. [Editor’s note: In “Burbank with a Baedeker; Bleistein with a Cigar,” published in 1920, Eliot wrote: “The rats are underneath the piles./The jew is underneath the lot./Money in furs. The boatman smiles.”]

What triggered the attacks on usury? The [Old Testament] Book of Ezra. Do you know what it is? It’s all in the simplest language and it’s all against usury. The only thing that Ezra reproaches the Jews for is that they didn’t follow their own law. I can see Ezra as a kid looking up and asking, “Why was I called Ezra?” He’d probably been made fun of by little boys who said, “What a name!” So he started to study and then speak out. He saw himself as a Hebrew prophet speaking to his own people. And they haven’t gotten it! And when he got excited, in the Cantos, for example, he was just trying to put down what he thought was evil. Evil for everybody. He was out on a limb on behalf of individuals or working on their behalf. No one ever tried to understand that. [Editor’s note: Toward the end of life, Pound did acknowledge his “stupid, suburban anti-Semitic prejudice.”]

Did he ever speak of the Pisa internment?

What happened was certainly against the Constitution in that it was cruel and unusual punishment. It was iniquitous. I don’t know why, but the fact that he was confined to a cage — a 60 year old man — was even worse. But it didn’t break his spirit, even lying there on concrete all night with spotlights shined on him, and incommunicado. No, he was never angry — except with the system. You know what the system is? Rotten then and still rotten. And what could he do about it? Ezra wasn’t the kind of man who bore grudges or tried to get even. He just didn’t have it in him.

Nothing upset me so much as that they never allowed him to defend himself. What could have happened? They would have condemned him, and then perhaps prison. Which would have been infinitely better than St. Elizabeths. They apologize now, but it’s 50 years too late. Oh, but they were sly. By getting Ezra [into St. Elizabeths] he couldn’t ask for a pardon. You can’t vindicate a madman. And to think, in ’39, when visiting the United States, he so liked Washington. He said he’d even like to live there…

Was he ever inspired in his final years?

In the last few years he didn’t come across anything the way he had with, say, [French sculptor Henri] Gaudier. It was all so commercial to him. So he did without. But the whole point is that he went on until the end. They didn’t stop him from writing by putting him in a cage. They didn’t stop him by putting him in a madhouse. Life was always very full for him. You know, people don’t really know how little Ezra Pound had financially. He was very much a Puritan in that way. He was against artists making too much money for their art.

I think there are a great many people who just want to die in peace, like Ezra. Someday perhaps it will come out that Ezra was a man of the law. He was very naïve in some ways. He trusted people. He didn’t see the treachery. I remember he enjoyed all the final trips we had to the United States. Despite everything, there was no accumulated bitterness.

Was he satisfied with his work, as you remember?

He was never satisfied with anything. From the beginning. “Should I chuck it into the canal?” That’s what he’d ask me.