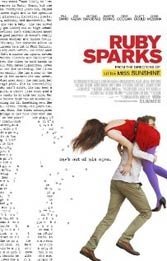 Whimsical films about a writer’s imagination become magical reality often fall on the wrong side of the maudlin. Not so here, thanks largely to a Zoe Kazan screenplay that sets up a premise and sticks with it to the cheering end. Calvin (Paul Dano) is a wunderkind L.A. writer who made his literary fame with a novel written in his late teens. But a decade later he’s stuck in rut, his self-esteem in tatters, his shrink (Eliot Gould) handing him a teddy bear for comfort.

Which is when he conjures up Ruby, a shy and worried nerd’s comforting dream girl. Inspired, he puts her character to paper, a fair enough way out of writer’s block — until, that is, Ruby (Zoe Kazan) appears in the flesh in his apartment. Here begins a 21st century Grimm’s Fairy Tale that enchantingly blurs reality with a strong “be careful what you wish for…” admonishment. Calvin is smitten by his creation, and she, naturally enough, with her happy life. Until “mused up” Ruby begins taking liberties that Calvin is tempted to revise or edit out. A fantasy dream girl come to life is available for editing, no?

The answer is film-long Vive La Difference examination of creativity, character, daydreaming, and romance, all of which Dano and Kazan — never vulgar — play out to wise perfection.

Kazan is writer-director Elie Kazan’s granddaughter, and she seems to pay tribute by giving Calvin an Olympia typewriter and the overall goings-on a decidedly timeless, non-L.A. mood. Bless Zoe: She doesn’t have a cynical drop in her body, nor does her sweet film. Annette Bening and Antonio Banderas are wonderful as Calvin’s wacky Big Sur parents.