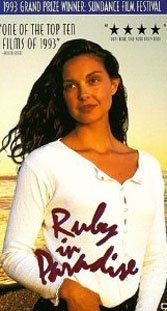 Floridian Victor Nuñez made two gems — this one and “Ulee’s Gold” — before vanishing into the lost latitudes of the film industry. “Ruby” is his best because it gives itself over to then-neophyte Ashley Judd, and she returns the favor with an exceptional performance that she never again matched (arguably because she wasn’t given the chance).

Judd is Ruby Lee Gissling, who has bolted home and gets a job as a salesclerk in a small Florida town during the sleepy off-season. Paradise this is not. She ends up befriending and sleeping with two men (Ricky and Mike, the latter played by “In the Bedroom” director Todd Field). Ricky is a handsome opportunist, son of the gift shop owner, while Mike is a good-guy gardener. This is Ruby trying to figure out who she is and figure out what her moon is made from, and it’s considerable harder and more sour than green cheese.

Judd’s Ruby is stubborn, aloof, compassionate and curious, at ease with self-discovery and entirely unsentimental. It’s the kind of darkly introspective and ironic female lead (“I heard that Hell is when all your dreams come true,” says Ruby) that only better indie films ever encourage, let alone allow. In this case, though, it’s as if Nuñez had literally told Judd to be herself while fleshing out a complete and convincing performance. She does both. Small masterpiece is overused, but this is both minor and masterful, like life.