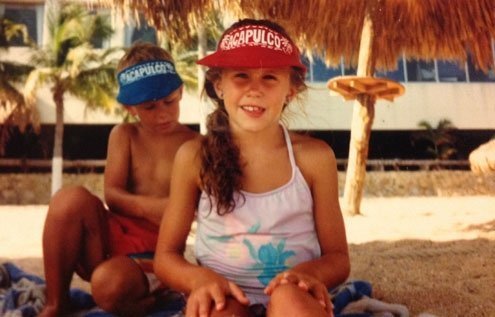 The author during her late 1980s trip to Mexico.
I

was eight-years old when my parents took my brother and I to Mexico at the invitation of my Mexican uncle’s family. It was my second trip abroad after The Netherlands, the country my grandparents’ had immigrated from after World War II. While Holland had an almost familiar sense — we gorged on hagelslag (basically chocolate sprinkles) every morning — Mexico was something else entirely. Mexico made the unknown world seem huge. It expanded my curiosity and left indelible impressions.

First memory: My youngest brother waving good-bye. We were leaving him behind.

Second memory: In Mexico City, rubble, and a gaping hole where a building was. Three years before, in September 1985, a massive earthquake — 8.1 on the Richter scale —had destroyed much of the city. I also remember snatches of a front-seat conversation about the extent of the destruction.

Third memory: Also in Mexico City, it may have been before we traveled to my uncle’s parents’ house in the countryside, we went to a bank to exchange a modest amount of dollars for a huge pile of pesos. My American uncle and dad laughed while I stared at the bills and the coins and wondered how we could suddenly be so rich. Though I didn’t understand “exchange rate,” it was clear that we’d gotten much more than what we handed out.

I remember a wrinkled old woman sitting under the tree outside the bank dressed only in rags, her hand out: this was my first encounter with poverty and the vast separation between our pile of pesos and her total absence of anything.

My uncle’s parents lived in a great ranch house that for some reason was missing its front wall. When we pulled in the dusty drive we could literally see into their house as if it were a museum model cross-section. There was blue tile inside and an avocado tree outside under which aunt sunbathed wearing a string bikini — both avocado tree and string bikini being new to me.

There was a girl who made fresh corn tortillas every morning, which we ate with scrambled eggs on the long table that abruptly stopped where the front wall should have been. We stayed in bungalows that were also on the sprawling property.

I wonder about these memories. Are they tenacious because of the harshness and hardness of the country? The landscape and the life of the people who lived on it suggested a kind of natural violence that had nothing in common with my native Michigan. Plants had hard leaves and the ground was stiff and dry under my feet. During a walk, I stepped on a cactus. The spines made me scream. My mom pulled them out of my foot one by one.

There were cockfights. I never went but my dad and uncle did and brought back a wooden box painted with two dueling roosters. Inside the box were cockfighting accessories: a metal claw that could be connected to a cock’s leg (among other more mysterious objects of unknown purpose).

We went to see the mummies of Guanajuato, creepy dead people all propped up in a line, their decomposed brown bodies still seeming to harbor the remnants of life. Expressions of horror twisted some of their faces and I was told these people were buried alive. Among the bodies was one of a pregnant woman who had also been buried alive, her fetus preserved, making it the smallest mummy in the world. (Author Ray Bradbury once saw these mummies and came away shocked: “The experience so wounded and terrified me, I could hardly wait to flee Mexico.”) We went to Teotihuacán to see the pre-Columbian pyramids, and I was told that the people who built them worshiped the sun and moon.

Since out stay coincided with my parents’ 10-year anniversary, my uncle’s family planned a feast. They bought a lamb, picked it up, and brought it to the butchers, who killed and skinned it. Next stop was a man in the village whose house was little more than a shack. Outside it was a fiery pit into which he lowered the pink carcass. Smoke billowed out. Sweating men covered the lamb with leaves and earth, and let the meat cook for a day. I have strong memories of the lamb’s smoky and tender taste. We ate it for days to come.

I remember the peso coins. On the back of each one — we brought back some as keepsakes — was the symbol of Mexico: a golden hawk standing on a prickly pear cactus holding a snake in its talon and powerful beak. Whenever I took the coins out later, spreading them out besides Holland’s guilders with their straight, practical lines, I remembered Mexico and its strange toughness. I thought about what other countries might be out there. And I resolved to travel.