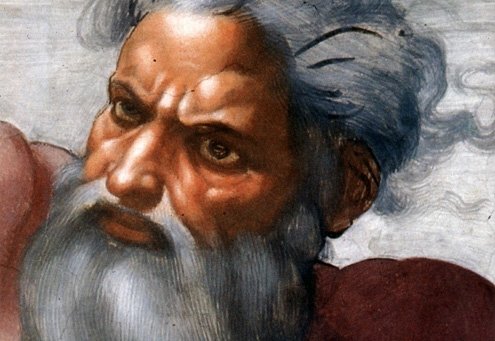 Seven years ago Roy Doliner noticed something wasn’t right with the Sistine Chapel’s ceiling. He had been working as a tour guide for three years. “I was following the party line,” Doliner says, “just repeating whatever the official Vatican guidebooks said.” What got him thinking was the Jeremiah Parchment, an hardly visible piece of paper painted to the left of the prophet’s right knee. “You can’t even see it from the floor, 65 feet below. The guidebooks all explained that the parchment contained the Greek letters alpha and omega,” says Doliner. “But when you look closely, as I did, you can clearly see that the letters spell out alef, followed by the Hebrew letter ayin. And the handwriting is definitely Michelangelo’s, because nobody else ever made it up there.”

From that point on Doliner — whose background is in Talmud studies and art history, and is also a certified interpreter for the hearing-impaired — began probing Michelangelo’s hidden Sistine messages and making his controversial findings public. Rabbi Benjamin Blech, an internationally recognized scholar on Judaism, got in touch with him and recommended the two of them collaborate on a book. Three years later Harper Collins published “The Sistine Secrets: Michelangelo’s Forbidden Messages in the Heart of the Vatican.” Marc Di Martino chatted with Roy Doliner in Rome. These are excepts from their conversation.

Your book presents a Judaic interpretation of the Sistine Chapel, but is it possible that it’s in the eye of the beholder?

Well, there is documentation for a lot of it, and there is also a lot of missing documentation that Michelangelo intentionally burned. So, some of the things in the book are evident and irrefutable. Take the presence of the two Jews in heaven. Look at the work and the scroll with the Hebrew word “alef” and the letter “ayin” — it’s right there. Also, there’s not a single Christian figure out of more than 300 figures on the ceiling… there’s nothing Christian up there.

Some might say that that’s the Old Testament, right?

Well, you could say that, but that’s not what the pope [Julius II] ordered.

What did he order?

The pope ordered Jesus and the apostles. The center was supposed to duplicate a geometric pattern that had been found in recent excavations of pagan imperial palaces. The middle was going to be … the papal tiara, the keys and the stemma of the papal shield of the della Rovere family, to show that they controlled the world. That’s exactly what Michelangelo did not paint.

So why did he let it go?

Well, the pope was called “il papa terribile,” he had a horrible temper. He did away with thousands of people, rode a horse with a sword strapped a sword to his side, and shot cannons through Perugia and all of central Italy. But he had a weakness: good art. After finally getting a sneak peek at what Michelangelo did on the ceiling, he let it stay. He and Michelangelo also faced the fact [that when Michelangelo turned to the ceiling], there was a good chance the three-dimensional marble mausoleum that Pope Julius had designed for himself for the center of the new St. Peter’s Cathedral [would go by the wayside.]

So Michelangelo made the ceiling look like a three-dimensional painted version of the tomb. At the top, over the door, he put the pope. The pope could stand at the alter, look across the Sistine Chapel, and see himself hovering over the main door to the room, at the top of the structure that looked like his personal tomb.

So he played to the pope’s ego, basically.

Beyond the hidden Jewish themes in the ceiling, your book highlights the explicit homosexual content in the Last Judgment. How does this all tie together in a unified vision?

Obviously it’s not what the pope ordered. So, if you have scholars who are saying that Michelangelo did every single thing that the pope and all the theologians in the Vatican told him to, that would mean they said, “Have a bunch of naked boys making out in heaven!” Something tells me this wasn’t what they ordered.

So why did he paint it in there?

Because Michelangelo had studied platonic love under Marsilio Ficino and Pico della Mirandola and other thinkers in the de Medici court in Florence, which was the hotbed of male love during the Renaissance. Same-sex love between men in the Renaissance was called “that Florentine tendency.”

How does the Vatican today see the blatant homosexuality of The Last Judgment?

First, they don’t talk about it. You won’t see it described in any of the guides, which just say “the elect in heaven.” Look at any other painting from the Renaissance of the elect greeting each other in heaven and it’s a club party. “Oh, hooray for us! You got in, too? We’re the elect, we’re in heaven, everybody else is going to Hell.” All of them are very chaste, giving each other a very distant handshake, or waving without touching each other, or maybe a Roman handshake, or, in the extreme, clasping each other’s shoulders.

Nobody has much emotional expressivity in heaven. In Michelangelo these guys are all naked, passionately hugging and kissing, deep mouth-to-mouth kissing while they’re naked. I doubt this is what the theologians asked him to do. There’s so much going on that front wall that you’re overwhelmed by the swirling mass, so you miss the individual pieces. However, [the ceiling] was violently condemned at a later Council of Trent. They said, “We must censor this for all the heresies and obscenities in Michelangelo’s frescoes.” They complained both about the ceiling and the front wall. “The Last Judgment” ended up being severely censored. The one we look at today is not the original painting that Michelangelo painted.

Michelangelo put two Jews in heaven right above Jesus in the Last Judgment. How do we know that they aren’t just Old Testament figures?

Old Testament figures would not be wearing clothing imposed upon them by the Fourth Lateran Council of 1215. One of them wears a hat that has two points at the top to make it look as if it’s covering two horns. The Inquisition claimed that Jews had horns, so they forced the Jews to wear hats [to hide] the horns beneath. The second figure wears the other cap that Jews had to wear. It’s yellow, the color of shame. The Nazis picked this up later on in World War II with the yellow star.

Follow the dance of the arms and hands: Jesus’ arm points up over his head directly to an angel dressed in red who is pointing to two other figures. His finger almost touches the hand of the first Jew, whose finger is pointing up to heaven just like Noah’s on the ceiling, saying “We’re monotheists.” We’re not into the trinity, but the one indivisible God.

If you wanted to depict Jewish converts, which were shown in art, they wouldn’t be shown in caps of shame with one finger pointing upward. They would be demonstrating their acceptance of the trinity.

You assert that Michelangelo was no longer a Catholic when he painted the Last Judgment. What was he?

We don’t assert this in our book. This is taken from a very carefully researched book, “Michalangelo, una vita inquieta” by Antonio Forcellino, who headed the team responsible for the major restoration of the Moses statue. He said in his book that Michelangelo, when painted “The Last Judgment,” was no longer a Catholic but part of an underground, unifying neo-Protestant movement that was originally based in Naples and called the Spirituali. Their Spanish name was Los Alumbrados, “The Illuminated Ones.” This shouldn’t be confused with the Illuminati of Dan Brown fame, which is another can of worms.

How did your experience with sign language influence your reading of Michelangelo?

If you’ve studied body language and hand gestures you’re overwhelmed by the “discussion” going on in his paintings. In Palermo there’s a chapel decorated by the great stucco artist Serpotta, who copied Michelangelo. In the background of very religious New Testament scenes are little stucco putti commenting on the painting, just as Michelangelo does in the ceiling. Unless you’re attuned to sign language and gesture, you won’t notice them.

Is the Catholic Church ready for such a reinterpretation of its holiest artwork?

Can you elaborate on that?

People who are dedicated to building bridges between faiths are already writing to us by the hundreds, saying that they really believe that Michelangelo had a message that was interrupted. People who believe in religious supremacy and value power over inter-religious friendship are going to be disturbed, and they already are.

In the book, you thank your skeptics. Why?

Skeptics ask the most difficult questions. They made me and Rabbi Blech go back and research, double- and triple-check. We had to write the book as if we were preparing for a trial. We had to back up everything with facts, logic, quotations and documentation. We tried very hard not to make the book a dry academic piece. It could have been like reading a legal brief. Michelangelo wanted his message out there, and we want to deliver it to the broadest possible audience.

Have you discovered the true meaning of Michelangelo’s message? Couldn’t there be various interpretations waiting to be discovered?

The Sistine Chapel is, as we say in the book, a many-splendored thing, a multi-layered work of art. We liken it to a Shakespeare play. It functions on many levels. You can look at it and see a very inspiring Christian piece of art, an inter-religious piece of art, neo-Platonic art, or just pure art if you’re secular or atheist. People will bring their own personal filters to it, as with all great art.

As Jews, we state in the book that this is a truth that works for us. We aren’t the Taliban of the art history world. This is the way that we understand the Sistine Chapel. We didn’t paint it, so we cannot criticize other interpretations.

What have been the negative reactions to the book, if any?

Who is “authorized,” according to them?

Art history professors or Catholic scholars. There were some vitriolic anti-Semitic responses, but not many. We were condemned on the website of the American neo-Nazis, which I feel is like getting a nomination. But that isn’t serious criticism, of course.

Will your book have any lasting results on the way people will see the Sistine Chapel in the future?

Only time will tell. Professor Enrico Bruschini, in his introduction to our book, wrote that you will never be able to look at the works of Michelangelo or the Sistine Chapel the same way again. And we don’t just discuss Michelangelo or the Sistine, we talk about the secrets hidden in Renaissance art with examples from Botticelli and Da Vinci, and many people have been thrilled.