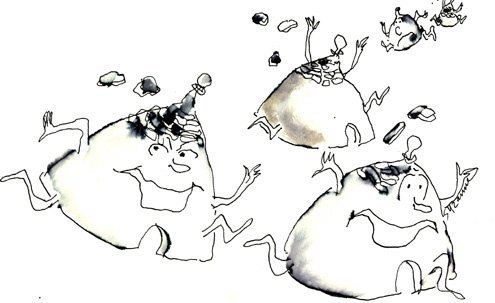 ound walls, coned roofs. What a strange way to build a house. Not for the feudal Selvesi. They erected trulli in Alberobello for more than 300 years, designing, redesigning and perfecting the circular house with a hat.

But as interesting as the construction is the story behind it, rife with greed, deception, power and a… no, I don’t think I’ll give away the ending just yet.

Some think that the origins of the trulli lie in the Middle East. Eleventh century Puglia witnessed a surge of immigrants from throughout the then-Ottoman run Mediterranean basin — including Syria, Greece and what is now Turkey.

Traders, slaves and prisoners escaping political prosecution sought shelter in the heel of the Italian boot. They found land but not shelter. So this amalgam of peasant people known as the Selvesi built what was normal to them: Circular houses with cornerless walls and a cone on top.

For some reason, the design stuck. Farmers, peasants and shepherds continued putting up the conical houses (there were also barns and storage sheds) for centuries. But in Alberobello there was a catch: The Selvesi were forbidden to use mortar.

Here’s the layman’s version why: During the 15th and 16th centuries the French and Spanish fought over who’d control Naples. The Ottoman Turks, seeing the Western giants distracted, seized the opportunity to conquer Puglia. This sent the locals running for the hills — literally. When news of the Ottoman invasion reached Naples, the French and Spanish turned to each other and said, more or less, “Look, I don’t like you and you don’t like me, but those sneaky Turkish bastards have gotta go.”

They put their differences aside, called on the counts of Puglia for assistance, and ultimately expelled the Turks. As a reward for helping send Turks home, the counts of Puglia received broad powers over their constituencies. At the time, Alberobello was ruled by the Count of Conversano, a clever, greedy man. Henceforward, we’ll call him the Count.

In 1481, he examined the territories around him and saw unattended land and no citizens. The Count concluded — it wasn’t difficult — that no citizens and no crops meant no money. The Turks had left the place a mess. Since the Count coveted cash, he chose drastic measures in an effort to reap the soil of his fertile earth.

While other regional counts imposed rigid standards on acorns, wood, water, livestock and planting, the Count offered his browbeaten citizens major concessions and a proposal that, loosely translated, read: “My dear friends, the time for Turkish oppression is over. Come to Conversano and harvest acorns, chop wood and drink water from your own wells. Let your animals graze freely among the ample grass as you plough and plant your seeds. And, as a personal gift, I will accept only 10 percent of the proceeds from your husbandry… Signed, Adoringly Yours, The Count.”

Ah, but then came the small print. “Mortar will not be allowed during construction of your residences. If said material is used, the Count reserves the right to demolish your homes and set fire to your dog…” (Or something like that. My text isn’t clear on the dog burning part.) Small print aside, the deal still sounded good to the locals. Soon, they came out of their hiding places to work the land in droves.

But why, they wondered, would the Count make such generous concessions yet veto the use of mortar? Rumors spread among the Selvesi. Some said the Count was allergic to mortar, which made him sneeze uncontrollably. Others insisted he’d been nearly buried alive as a child and that the sight of mortar was too much for him to bear.

The real reason was something different, something brilliant.

The many rulers of Puglia, first the French, later the Spanish, imposed what’s called the Prammatica de’ Baronibus, a tax structure that called for a royal commission to check out new developments firsthand and assign the appropriate levies. Ideally, it would work like this: The Count would call up the commission and say something along the lines of, “Hey guys, I’m thinking about developing this area in Puglia. Can you send some people over to tell me how much it’ll cost in taxes?” Royal officials would be dispatched, assessments made, and taxes duly set.

But our Count bypassed the protocol.

He didn’t want to pay taxes on his new developments. Instead, he wanted to pocket the tolls personally, which is why he’d flattered the locals with low rates in the first place. The problem, of course, were the Spanish inspectors. They’d eventually show up in Conversano unannounced, find the new houses, and demand that he pay up. The scenario was inevitable. The Count flirted with bribing the commission, but realized that bribes would be just as expensive.

Then, a brilliant idea struck him. What if there were no villages for the commission to see? What if he forced the Selvesi to build houses without mortar and enlisted spies to guard against unexpected visitors? If inspectors approached, the Count would order the immediate dismantling of the houses (they were called casedde) and instruct the Selvesi to run for the hills.

Bingo. Up went the mortar-less homes.

The scheme was tested in 1644. A neighboring duke who envied the Count’s sneakily abundant cash flow told royal Spanish authorities that something was amiss. There were houses, said the rival duke, that the court didn’t know about. He demanded an inquiry. But the well-connected Count uncovered the duke’s ploy and instructed the 500 Selvesi to follow the plan and take apart their homes, which they dutifully did, and leave town, which they also did. Legend has it they accomplished all this in a night.

When the royal inspectors arrived they found only piles of limestone. There were no urban areas, no houses, no developments, and above all no people. The royals smacked the snitch duke for wasting their time and returned home to Spain. When the Count sensed that the danger had passed he called the Selvesi back. They rebuilt their homes and pressed ahead as if nothing had happened.

This continued for centuries. Daily life among the Selvisi always threatened sudden exodus. After 300 years, the Selvesi said “enough.” They formed a posse consisting of four priests, two doctors and a builder, and sought out the Spanish king. By chance, King Ferdinand IV had stopped in Taranto, a city near Alberobello, on his way to the wedding of his son, the Duke of Calabria. When the posse reached the royal camp they requested and received an audience. The supplicants told Ferdinand of their oppressed state over the centuries. Ferdinand apparently listened with an open mind and a kind heart. Or maybe he just felt benevolent that day. But on hearing their tale, he acted.

On June 22, 1797, Alberobello was freed of its yoke. When the group of seven returned, they were greeted with celebrations and festivities. The people who dwelled among Alberobello’s beautiful trees (alberotree: bello/beautiful) living in the trulli (trullo is dome in Greek) were finally out of the woods.