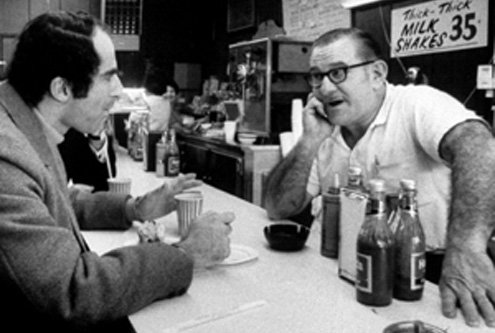 Remember: Roth’s called him “ghost” before. Since his job as 1979 narrator-voice in “The Ghost Writer,” NZ “himself” has narrated nine of his author’s 16 novels. Often using one of his own alter egos.

Right: that’s typically specular Roth trickery. He and his Zuckerman envoy are both ventriloquists. Ghostwriters, by trade. More: through the years they’re equally famous, Jewish writers. Playing hardball with reality and illusion.

But now it’s 2004. Zuckerman’s a shadow, shade, ghost of his earlier self. He has failing memory, uncertain equilibrium and 24/7 diapers. With unsparing honesty he recreates the deteriorating life of old age.

And in the process “Exit Ghost” becomes signature Roth. Brainy rumination cracking fireworks. Within a story which all comes about… by chance.

Poor Zuckerman. Ten years ago, terrified by Kill-Jew threats, he fled Manhattan. For a safe, hermit-writer’s life in the Berkshires. Great. Until a prostate operation excised penile virility and added flooding incontinence.

Briefly he returns to NYC. Seeking (finally unsuccessful) hospital help. For those diapers. Reluctant to re-enter the city’s exuberant chaos, he vows: no real-politik chat; no Ground Zero visits; no memory bytes.

Even so, Zuckerman’s back in town. Life in its slippery nature explodes around him.

In that NYC hospital he spies, by chance, the horrendous surgery-scarred head of Amy Bellette. Last love of Zuckerman’s literary hero E.I. Lonoff. The perfectly perfecting writer met in (surprise?) “The Ghost Writer.” Zuckerman well remembers him, and Amy. Impulsively ceding to coincidence, he decides to meet her.

Newspaper-skimming, he notes a young couple’s real estate exchange ad. For a recluse cottage. Like his. An ad, “So pointedly addressed to me that I felt myself being urged on… by chance, sheer chance.”

And NZ encounters seductive Jamie and ambiguous husband Billy. Two lives grounded in a single hope: that Kerry become president in 2004. At his defeat, their fragile world collapses. The young woman babbles of punitive and imminent terrorist attacks, and oh, the disappointing, frightening world. Escape!

It allows him to enter her life. Meet her aggressive friend (lover?): critic Kliman. Who’s writing a Lonoff exposé. Another happenstance. Seems cancer-maddened Amy gave him first half of the master’s last work. Unpublished. And a hot scandal. In a moment of sanity, she wants it back. Won’t Zuckerman help?

Kliman’s exact question. With opposite intent. Uneasy, but helplessly drawn to this or any unfolding tale, NZ sets a new meeting. Here Kliman threatens: Old man, you better get me the rest of that novel. He sniffs the diaper-redolent air: “You stink, old man.”

Drowning in life again, NZ encounters its pure raptures, and dangers. Because what Z and all of Roth’s cast want is: the unattainable. It’s this feverish impossible desire which makes them so enormously human, and poignant.

Kliman seeks fame by exploiting scandal. But is this Lonoff’s novel? Or one of the many “dictations” Amy claims to receive from her dead dear?

Jamie says: I have to escape! Or does she simply need new games to play. She enjoys being watched. For the Jamies we know, is there ever enough attention?

Billy wants to drown in stories of his wife’s childhood, or in her morning silhouette seen in their bedroom mirror. He yearns for an improbable melding of identities.

Amy keeps her darling’s old shoes in her closet. And often stands in them. She wants to prolong daydreams of past love. Yet she and her mind are not slowly dying.

And Zuckerman? What does this impotent man want from those seductive He/She dialogues with Jamie? First fantasized, then effected. In a call inviting her to his hotel room. An invitation she accepts.

By tale’s end Zuckerman at least has learned something. That the excruciating imaginative delights of desire-even forever unfulfilled-are not dead to him. That he can still full-immerse in real lives. However painfully.

Before Jamie does (or doesn’t?) arrive, he hastily leaves New York. There’s but one thing left that he wants: his writer’s cottage. His writing/His life.

Der Spiegel interviewer to Roth: “You killed off Zuckerman with a final blow: ‘Exit Ghost’“

(Exit Ghost (Enter Roth) In whatever form his next novel brings. Maybe as Zuckerman once more. Why not?