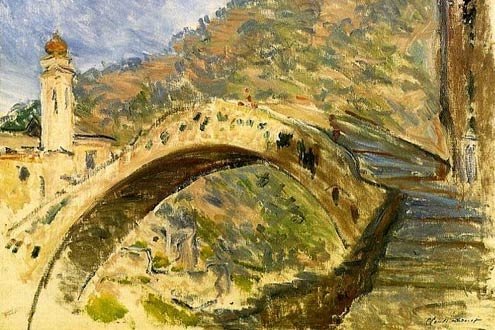 Detail from Claude Monet’s "The old bridge on the Nervia at Dolceacqua," 1884.
T

he menu of my favorite hometown restaurant, Nonna Nina (Grandma Nina), is written by hand and contains plenty of Ligurian dialect. It was at Nonna Nina that I sought refuge on a cold and rainy April night that seemed more like February. The restaurant is located in the fishing village of San Rocco di Camogli, about a mile from where I live and its management is like family. Rosalia and Silvia greet me as I walk in, while Paolo, husband and father, is busy in the kitchen. On a nasty night, its white walls and simple wooden furniture are especially cozy.

The seafood hauled from Camogli’s tonnara — or fixed nets — is the restaurant’s strong suit. The fresh antipasto del mare, my favorite, includes tiny tender squid and anchovies. I picked antipasto ahead of a main course of grilled tuna, a tough choice since the menu that night also offered coniglio alla ligure, Ligurian rabbit roasted with olives and olive oil, a local delicacy.

The normal wine pairing with a fish or rabbit dinner would be a Ligurian white like Pigato. But the thought of chilled white on a cold night made me shiver. I wanted a red suited to seafood and Silvia recommended Rossese di Dolceaqua, a wine made from native rossese grapes (dolce aqua means sweet water).

No one knows for sure whether it was Greeks or the Etruscans who brought this grape variety to Italy. Either way, it’s been grown for centuries on steeply terraced vineyards — 300-to-600 meters above sea level — just inland from the coast along the River Nervia near what is now the border between France and Italy.

Curious to know more, I went to Rapallo’s enoteca Cantina du Pusù, which is owned and run by Guido Tassara and his son, Giovanni and has a remarkable selection of quality artisan wines from throughout Italy and France.

When I told Giovanni that I was interested in rossese, he scampered up a ladder to a high shelf and began handing down bottles. He explained that most producers have a “basic” wine (€12-14) as well as several “cru” wines (€15-20) made from selected grapes grown on specific hillsides.

I read the strange “cru” names from the labels aloud: “Arcagna, Poggio Pino, Luvaira, Beranga, Posaú.” I asked him how they differed.

“They are more similar than different,” he said. “All the vineyards are on steep terraced slopes and most of the grapes are grown on alberello vines.” He reached for another bottle. “And we’re talking about old vines, 30-to-100 years old.”

The alberello technique is an ancient way of growing grapes in which each vine is pruned to resemble a tiny tree (albero), its leaves shading the grapes against summer heat. This method is still widely used in the Italian south but is rare in the north.

Giovanni rattled off the names of the small family producers, all of them local, that typically make between 5,000 and 20,000 bottles a year using traditional, sustainable growing methods. They included:

Two bottles he held up with particular reverence. They were from the Mandino Cane estate, which had been known as top producer but had stopped making wine.

I tasted a wide selection at home and came up with a favorite, Rossese Di Dolceacqua Galeae DOC 2010 Kà Machiné, whose label abstractly represents the hardships of harvesting by hand on the terraced vineyards. All the wines were delicate with very light tannins, clean acidity and subtle aromas and flavors.

Though I’d successfully paired the wine with fish, I noticed that the rossese were balanced enough to serve as a vino di meditazione (a stand-alone wine) and also had sufficient complexity and structure to pair with almost any food, whether chicken, meat or cheese. They are best served at cellar temperature (14-16C) or even a bit cooler in summer.

The wine and Giovanni’s stories piqued my curiosity. I found myself combing the web for more information on Dolceacqua, its medieval castle (once owned by the Doria family), and Monet’s work (he was taken with the area and painted a number of canvases).

Suddenly, I had a “Horton Hears a Who” moment, a throwback to Dr. Seuss’s wonderful story about an elephant that finds a clover imprinted with an entire universe. Like Horton, I felt I’d discovered a world apart, a beautiful, hidden place with a rich tradition and wine at its core.