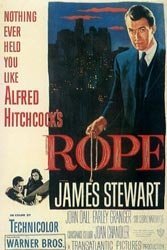 There’s the whole of Hitchcock and then there’s “Rope,” a stage play-style movie that fell out of favor soon after its 1948 release. Based on Patrick Hamilton’s play about the Leopold and Loeb “thrill kills” of 1924, it tracks two urbane Harvard dandies — astute, half-mad Brandon (John Dall) and the meeker Phillip (Farley Granger), a pianist — who attempt to pull off the perfect murder, strangling a classmate with a rope, sticking him in a chest, and holding a party in the room where he’s concealed. Perfect murder also demands perfect voyeurism. At the party, among others, is the dead man’s father, his former girlfriend, and Rupert Cadell (James Stewart), their prep school headmaster, whose übermensch tendencies master manipulator Brandon wants to test, teasing him to figure out what’s actually happened.

But the tease soon goes too far. Lovers Brandon and Philip — their relationship is unmistakable — can no longer handle their roles, with the latter slowly coming apart. Bold talk about superior beings and murder as art yields dusk, twilight, and finally night — all of it played out with the New York skyline painted onto a so-called “cyclorama,” a remarkable curtained backdrop. Hitchcock’s single-scene illusion (the film is actually 10 long takes) deepens the story’s psychological undercurrents, in particular the tension between the killers and Cadell, the rhetoric-spewing ex-headmaster who ultimately exists to refocus the youthful “exuberance” of murder into a heinousness that less to do with Nietzsche or Freud and more with moral baseness.

Everything about the action is micromanaged mayhem. But this is, remember, a chance-taking effort produced in 1948 Hollywood, hardly an avant-garde paradise. Hitch puts eight people in a charged room and won’t let them drift for an hour. Stage actor Dall is alarmingly in charge as the amoral Brandon. Stewart’s chameleon-like Cadell transforms from seeming co-conspirator to troubled moralist. The late Roger Ebert once called “Rope” “an experiment that didn’t work out.” If that’s true, consider it a failure that comes ahead of many a crowd-pleasing success.