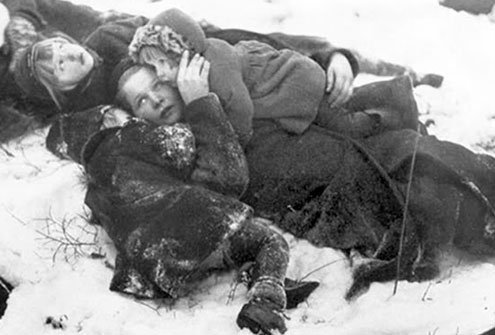 hen my maternal grandmother was 16, her father — head of the Voses clan — moved the whole family, his wife and four kids, to Canada. They left behind war-torn Holland for a country they’d never been to, a language they didn’t know, and a culture they knew based only on what was strange and unfamiliar.

Economically ruined and bombed out postwar Europe could seem like a hopeless place, with many expecting years of hunger and uncertainty on the heels of five years of conflict — since The Netherlands was among the first nations invaded by German troops.

The Voses saw their house burned to the ground by Nazi occupiers in search of Jews. My great-grandparents did hide Jews, and somehow survived.

My grandma once took me to the place where their house once stood, in sight of a canal she once walked along on her way to school. She recalled the German soldiers as they marched toward the house, the sound of their gleaming boots hitting the frozen ground.

She hid in a haystack until fire flushed her out. She remembered a Jewish school friend who was there one day and gone the next. She told about train cattle cars packed with bodies moving to and from the Westerbork transit camp (Anne Frank was there for a time). She recalled the sight of hands frantically grasping from the grates, people who couldn’t breathe. Most of the people in Westerbork ended up in Nazi death camps.

Once in Canada, the Voses found that little was easy. But they still retained the hope of a new beginning, albeit coupled with hard work. My grandma, a teenager at the time, never went back to school. Instead, she worked fields picking cucumbers. The pay was meager and she lived in the house of a stranger, her host. One night, that man chased her around the kitchen table trying to get his hands on her.

Struggles gradually gave way to progress, and she and her siblings began to define their life according to their new country. They learned English, married, had children.

When I was growing up, I rarely felt any immediate connection to Holland, though the country was always present in my life through my mother and her parents. At home, we used stray Dutch words instead of “washcloth” and “underwear.” We ate hagelslag — chocolate sprinkles — with toast and butter. We knew how to pronounce Gouda (say the “g” as if you’re gathering spit in the back of your throat). We wore wooden shoes with woolen socks outdoors. We’d visit family in the Netherlands and eat pannenkoeken (pancakes) at their sunny tables in the mornings.

I recently went back to Holland, though not to see my Dutch family but my father, a full-blooded American. The book I took along was Jhumpa Lahiri’s first book, “The Namesake,” a short novel about uprooting, disorientation, displacement and the complexity of creating identities in new places, her favorite themes.

Though she writes about Bengalis moving to the United States, her underlying focus is on the immigrant experience and the universally shared feelings of those who find themselves somewhere where they sense they don’t completely belong.

One of her characters is Ashima, a young bride new to America. Being a foreigner, she soon understands, “is a sort of lifelong pregnancy — a perpetual wait, a constant burden, a continuous feeling out of sorts. It is an ongoing responsibility, a parenthesis in what had once been an ordinary life, only to discover that previous life has vanished, replaced by something more complicated and demanding.”

Lahiri’s younger characters are like that: caught between their new country, where they were born, and the India of their parents. They visit Calcutta possessed with unfamiliar familiarity, knowing the language and the customs, but not feeling a part of either.

Maybe my mom had similar feelings while growing up in the U.S. with Dutch parents. She’d return to Holland every so often, speaking Dutch at home. My own Dutch connections are weaker. Yet while I was there I had brief flashes of my roots, perhaps more visible because they’re absent in my adopted country of Italy.

Like my great-grandfather and Lahiri’s characters, I embarked on a journey to a country I didn’t know, Italy, a place where I had no connections, no sense of language, place, food and culture. All of it was foreign. Like my predecessors, I’ve come to understand the importance of small reminders that point out where I’m from.

In Holland, just before catching the tram to the airport and our return flight, I dashed into a local grocery store across from the platform. For the first time all weekend I was vividly aware of the old connection. I had only intended to pick up some Gouda cheese, but I couldn’t stop there. I grabbed soup mix, chalky peppermints, and stroopwafles, all of which I ate in Italy, as if sampling the faint intimations of my origins.