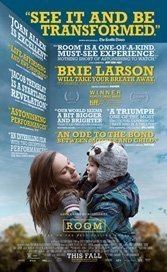 Young Jack and his mother are prisoners and hostages in a matchbook sized room. He’s never seen anything but the room or his mother, known only as “Ma.” She’s been trapped there since before his birth. The room — damp, cold, dirty, with a threadbare kitchen — is a survival chamber. Their only awareness the world exists is through a tiny ceiling skylight. They measure time through light and darkness.

Their captor is a mystery man known only as “Old Nick,” who feeds them but does little else. But Old Nick is the reason “Ma” has tuned out the real world, creating a vivid parallel universe to keep Jack from understanding the reality of how he got there — she was abducted and raped. But on Jack’s fifth birthday, he and Ma put an escape plan in motion.

Irishman Lenny Abrahamson’s remarkable film is based on Irish-Canadian novelist Emma Donohue’s 2010 novel of the same name (Donohue also wrote the screenplay). He meticulously sculpts the psychological and physical bonds between son and mother, deftly weaving between maternal love and the effects of claustrophobia. Jack is the story’s narrator, the world seen through his eyes. Abrahamson divides the film into two parts: the first covering the duo’s confinement; the second their escape and return to the real world.

The transition is credibly edgy. After years in a safe and secure spot, mother and son must now face the frequently terrifying reality of day-to-day life, and the media attention that goes with it, a life with its own set of perils.

Brie Larson is stunning as the kidnapped young mother deprived of adolescence. Terrified and shattered, her life mission is to minister to Jack, played masterfully by Canadian Jacob Tremblay. And it’s Tremblay’s Jack whose boundless resolve and expressiveness deepens the scope of this unsettling survival story. Donohue said she wrote the novel after reading about the 2008 case of Elisabeth Fritzi, an Austrian woman held hostage by her father for 24 years, bearing seven children.