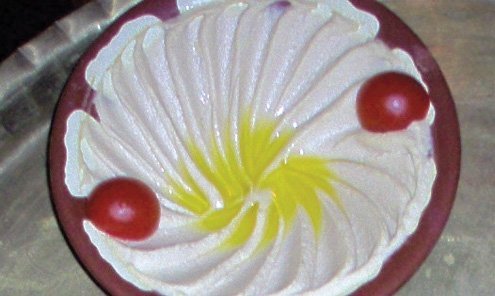 Mezza, including hummus, falafel and sougock, can be a full meal.
T

he Zenobia “family” likes gathering in the restaurant’s basement tearoom, the “Sala Damascina.” Woven and sheepskin rugs from Syria adorn the cozy little room where, after dinner, most people sip tea and Arabic coffee with dessert and smoke narghile.

Though waiter Hanna “Giovanni” Mansour has only worked at Zenobia for a year, he feels at home. “We are all friends, like a family here. I knew some of her [owner Viviana Tabash’s] family in Syria. I came here as a friend, not to work,” said Mansour, a civil engineer who came to Italy from his native Damascus to do a doctorate in civil engineering at Rome’s La Sapienza University. “The cook is like my brother. We always eat lunch together, sometimes dinner depending on how busy we are. It’s like being at home.”

For the 53-year-old Tabash, who opened the restaurant in 1997, the first years reminded her of home the hard way. A trained archeologist, she did all of the cooking. “I did it the way I learned at home alongside my mother,” she explains. Although none of her employees are blood related, they are all Syrian, and they are tight-knit, giving the restaurant a homey but cosmopolitan ambience.

The restaurant’s front room is college café in structure, Syrian in style: Sheepskin rugs cover the floor with pillows arranged so people can sit comfortably around low wooden tables and eat family-style from bowls of hummus or falafel or drink tea and watch the television, which is usually tuned to Arab-language channels.

There is a framed poster of Pope John Paul II praying in Damascus with the words: “Syria: Cradle of Civilization and Faith” and”“Have a vision: Take the Road to Damascus.” Covering the walls are images of the restaurant’s namesake, Queen Zenobia, the Syrian Queen who defied the Roman Aurelian in the third century and died in exile in Tivoli.

Tabash, who worked in London and Paris before moving to Rome in 1985, opened Zenobia to give Italians a chance to sample her nation’s cuisine. “They [Italians] don’t make distinctions. You are Arab and that’s it. Syria is the cradle of antiquity, but unfortunately there is no knowledge about the culture here,” said Tabash, who was born in Jordan but grew up in Damascus. “Italians don’t have a real understanding of Middle Eastern cooking, and ethnic cooking is still new. Rome is not like Paris or London, where you can find real Syrian cooking. Here an Egyptian can cook Syrian without knowing the real ingredients.”

With the help of a Syrian friend and restaurant owner in London, Tabash, who is Christian, created a menu featuring just one non-Syrian item, couscous. The North African dish, she explains, appeals to Italians, who are more familiar with it. The menu includes several meat dishes and traditional kebabs, but appetizers seem to go down best with people, particularly hummus, falafel and sougock, Tabash explains.

Customers often ask how these favorites are made, and Mansour imparts some secrets: Hummus is made by boiling chickpeas in water, then mixing them with sesame cream, lemon, salt and oil. Onion and garlic are added to the same mixture to make falafel. A machine makes this mixture into round patties, which are then fried in a bit of oil with garlic and onion. Sougock, flaky pastry shells that resemble big ravioli stuffed with lamb, are made with spices imported from Syria.

A few days a week, Chef Bhaghat Skef shops for fresh fruits and vegetables at the nearby Piazza Vittorio Market, reputedly one of the city’s best and certainly most diverse. Even with such variety, Skef, who worked as a chef in his native Latakia in Syria, explains that some Syrian dishes are difficult to make in Italy. “Here we can make Roman style Syrian bread. The ovens are different [in Syria] — wood burning or terracotta ovens built into the walls. This affects taste,” he said. “The meat is also different. Meat in Syria is more tender because animals in the dessert eat natural foods; they don’t eat pre-prepared foods that bloats them.”

Skef’s favorite dish both to prepare and eat is the Faroj Mahshi, chicken stuffed with rice, peas and carrots and baked in the oven. Chicken kebabs also go over well with customers, as do the delicate desert cookies, Mammul-Barazih. Skef, in the kitchen, shows off a hot pan of thin shortbread full moons covered with sesame seeds. He bakes them every other day and first makes the dough of pure flour, sugar and rose water. The dough is then placed over various marmelade-textured fruit sauces consisting of a paste of rose water and honey mixed with ground up dates, pistachios, orange or sesame.

The restaurant has a lovely location on a quaint side street in one of Rome’s most dynamic neighborhoods — ethnically diverse and architecturally interesting with historical Palazzi Umbertini lining its streets. Tabash complains that this hidden gem goes unnoticed by both tourists and locals, but admits that business tends to pick up during the winter.

The restaurant mostly gets a trickle of familiar clientele, an elite, Tabash explains. “We get whoever has traveled, those who know a bit about the Middle East — journalists from RAI and Canale 5, a lot of employees from FAO, other U.N. organizations, the embassies, some politicians,” she said. “On September 11th, the business and commercial attaché from the U.S. Embassy was eating here. We saw it on television together.”

That day, and the introduction of the euro, slowed down business, she said. “Life has become very expensive,” Tabash said. “If Italians felt [the change] 50 percent, then we felt it 80 percent because Italians will eat Italian before they will eat Arabic. Without pasta, Italians don’t know how to live.”

But the restaurant does seem to have set the standard for regular connoisseurs of Arabic cuisine. Zenobia is listed in Vittorio Castellani’s (alias Chef Kumalé) “Guida alle cucine del mondo in Italia: I cento migliori ristoranti.”

“I’ve done all of the Arab restaurants in Rome,” says Casablanca-native Halima, one of the restaurant’s belly dancers, sipping tea before a performance. “This is the best. You eat really well here.”

Halima’s own art is an attraction to the restaurant’s clientele, drawing people Friday and Saturday nights, and other nights on the request of at least 10 people. Halima also gives belly-dancing courses at the restaurant. Call the restaurant (06.7049.0488) to further information.