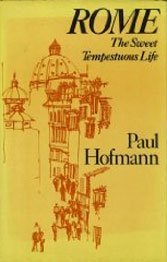 ver the years, foreign correspondent Hoffmann wrote a number of meticulously bittersweet accounts of life in Rome, though regrettably few were very successful. That’s largely because he stuck to specifics (through anecdote) and avoided self-indulgent cliché. But one of the problems of chronicling the Eternal City is the recurrence that comes with eternalness: The static nature of the city means most Rome biographers seem in one way or another to be stuck writing the same book.

This 1982 volume, circulated mostly in Britain, contains Hoffmann’s trademark recounting of Rome’s pleasures and annoyances, with mordantly welcome and enduring insights on prostitution, terrorism, television, the tendency of Italian journalists to write prose that only their tribe can understand (“…like a text in Romanian or a secret code”) and the passage of time (“Romans aren’t … a split-second people: they regard hours, even days, as approximate units of a creamy commodity that can be spread, squandered, and leisurely enjoyed.”)

But what makes this group of literate and finely-drawn essays particularly useful is the way they chronicle the rise of faux-sophistication of 1970s and early 80s, a time in which pretend worldliness (“talk for talk’s sake..”), me-first vulgarity proliferated in concert with the success of television, setting the stage for the pop-culture coarseness that then and now was mistaken for internationalism. Rome remains provincial in all things, which Hoffmann knows and notes.

Recalling the Wilma Montesi case, a now-forgotten murder mystery that riveted Italians in the mid-1950s, he writes: “Looking back today, the general impression is not so much of decadence as of tawdriness, flimsy institutions, and astonishing disorder.” Or, as a chief of section at the foreign ministry says of his secretary: “She is charming but completely unreliable.” Much as the city was then, and still is now.