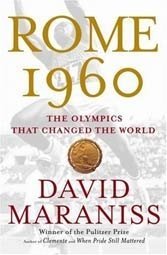 araniss is an accomplished storyteller with luminous work to his credit, but much of this account of the 1960 Rome Summer Olympics is burdened by contrivance. A description of Abebe Bikila, the Ethiopian with the “narrow, bony back” who ran the Marathon barefoot because his shoes didn’t fit is supplemented with a big picture comment: “The crosswinds of change were blowing across black Africa that summer, with so many new nations being born…” True enough, but it has little to do with the memorable Bikila or his running style, or even his Ethiopian nationality.

The device hounds Maraniss, who is intent on making the Rome Games into a catch-all watershed for Cold War divisions, American race relations, the end of amateurism, the growth of television, women’s rights, steroid use, German unity, Apartheid, International Olympic Committee entitlement, and the list goes on. Rome’s “autumnal sun,” he writes, shone on “a moment of historical transition when one era is dying and another is being born.” And later: “The world seemed on the cusp not just of a new decade but of a new cultural era.” This is misleading, since trends in modern sports and social politics can be mined from every year between 1950 and 1970.

But when Maraniss sets aside gravitas to focus instead on the events and the athletes (genial sprinter Wilma Rudolph, motor-mouthed boxer Cassius Clay, deliberate decathlete Rafer Johnson, among many others) he’s vivid without fail. On runners preparing for the start of the 100 meters: “Aposti. Fingers up, backs curved like frightened cats, heads rising with anticipation.” — the renegade German Armin Hary won that race.

Rome and Italy are marginal players, since Maraniss leans heavily on American and British newspaper accounts of the time. He flirts with eccentric sidebars; Italian Communists applauding Soviet performers, for example, and Yugoslavia all but giving up in a basketball game against the U.S. to focus “on saving energy for the Soviets, whom they truly despised,” but gives these teases little elbow room.

In the end, the book succeeds as selectively elegant portrait of a mid-century Olympics, but stutters when freighted with its grander architecture— “deeper context,” Maraniss calls it. As for Rome’s sun, it’s never autumnal in September.