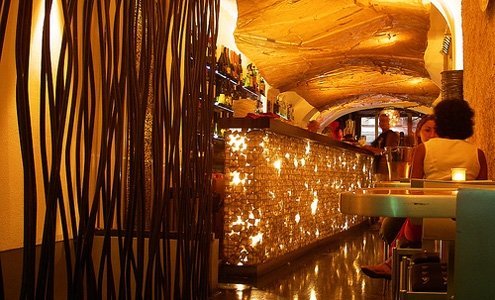 ack in Rome after an eight-year absence, I found myself strolling aimlessly through my favorite vicoli in the centro storico. An evening passeggiando al fresco with a pause for wine at a bar-enoteca or just to lean against a motorino, chatting with friends and people-watching, is still among the city’s most pleasurable and typical pastimes.

So imagine my surprise, as I walked along serpentine Via del Governo Vecchio near a little pizza al taglio shop amid outdoor restaurants replete with late evening diners sipping on moscato or an amaro, to find Fluid, with its floor-to-ceiling glass windows, a white glow pouring out, and inside wood panels with fitted monitors displaying psychedelic images.

After four years of New York City bar-hopping (weary of the snobby chill of the Meatpacking district’s sleek lounges and being forced to stretch my mouth to a gigantic “O” for every oversize sushi morsel, praying that it wouldn’t unravel in front of my date) I could hardly reconcile Fluid with the Rome I once knew.

While quaint bar-enoteche remain a staple of Roman nightlife, the emergence of places like Fluid suggest a change in outlook. Consider the minimalist décor, the carefully-programmed thermostat and the DJ chillout/trance compositions. Then there’s the sushi, and the Martinis and Manhattans at the bar.

Did Rome build a bridge to the 21st century while I was away? Fluid and other bars like it — including Zest and Crudo — suggest that it did. The bars, which could be part of the urban bar scene in any major capital from New York to New Delhi, are all relatively new and cater to a 20- to 30-something crowd. Fluid and Crudo opened in 2003 and Zest in 2002.

The Manhattan-driven décor at all three bars elicits a sense of industrial urbanity and nature through the use of wood and cork combined with iron, aluminum and cement. There’s an edgy, sexy feel associated with the liberal use of smooth metal and other hard, industrial-grade materials.

Crudo’s enormous three-floor, 350 square meter space is tastefully and minimally decorated in muted shades and makes liberal use of recycled materials, as well as wood, cement and iron. Co-owner Massimo Terzulli explains that he wanted the “materiali messi a nudo” so they are visible (literally translates to “the materials put in the nude,” which of course rhymes with “crudo” not “crude.”)

The lounge bar also has interesting and original artwork on many of its walls, such as a large, stylized, glittering face of the owner’s dog. They also project videos on the wall in the main entrance.

Fluid took the idea a step further, putting a tree made from twisted iron in the main entrance. The cream-colored ceiling, which looks like the interior of a cave, is made of plastic fiber glass, vetro-resina, as are the little stools that look like lit-up ice cubes. Co-owner Christian Ancillai (along with his brothers/partners Adriano and Manuel), describes the vision behind their décor as “thinking about nature and what is natural but in modern terms, with modern elements.” The floor in the back room is made of glass laid over regular beach sand, and three walls are composed of large white stones held in line by an iron grid, while the fourth wall has blue-tinted water rushing downwards and sideways behind a glass panel. Even the bathroom downstairs is worth a look, with its hanging sheets of aluminum and a toilet nestled in a bed of white rocks covered by glass.

London-based Jeremy King and Milan’s Riccardo Roselli designed Zest, which is located on the top floor of the Es Hotel near Termini train station. The architects like smooth undulating rounded shapes and surfaces. The bar near the swimming pool is a long, gleaming sheath of metal with two wooden buckets in the middle. Tables have dishes of fresh berries ready to garnish fresh-fruit cocktails. Asymmetrical, marble, kidney-shaped tables with ripple-textured white lawn chairs surround the pool.

The pool bar is open only in summer, with the indoor Zest bar taking over in colder weather. Bar manager Gastone Pierini says the season makes little difference, with a well-heeled Italian crowd attending year-round.

The summer bar menu offers a fairly typical mix of fresh salads and sandwiches, among which a nice BLT stands out, as well as an extensive list of cocktails and wines, with wine by the glass ranging between €8 and €12.

The food varies at each place, but I found that most of the new bars don’t forgo their own Mediterranean twists, such as mozzarella and tomato appetizers, shaved, grilled zucchini with a drop of balsamic vinegar, and various cured meats and cheeses.

Zest and Fluid offer an aperitivo alla Milanese, which basically includes buffet finger food and salads free with whatever drinks you order. This allows people to socialize after work and skip the time-consuming and increasingly expensive (thanks to the euro) routine of going out for dinner, particularly when they have to rise early.

The three bars are also experimenting with more creative food concoctions, similar to those you would find in fusion and avant-garde restaurants in New York. Crudo’s menu is eclectic, with “spoon-food,” which is basically a spoon-sized portion of a particular blend of ingredients presented as a stand-alone dish. They serve only raw foods, including fish and beef, and follow the philosophy that “raw, unprocessed and simple” allows for better tasting, drinking and conversation, and this carries over from their kitchen to the décor, according to Terzulli.

On average, prices are a bit higher than at typical wine bars, reflecting the costs of DJ music and ultra-attentive table service. But you can sit tight. Fast table-turnover, pleasantly, is one technique that Italians have yet to master.