Rome and Jerusalem: The Clash of Ancient Civilizations 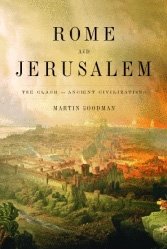 Martin Goodman has written a highly informative (and entertaining) book about the Jewish-Roman war which culminated in the destruction of Jerusalem. His thesis is that this conflict, one of the pivotal moments in Western history, didn’t have to happen. It was a kind of unfortunate accident having more to do with internal struggles for power among contenders for the imperial throne than any irreconcilable cultural differences between Romans and Jews in the first century of the Christian era. What began as a minor revolt in Judea was escalated by the then-general Vespasian into a brute show of force when he most needed a military victory under his belt. The final blow would come after years of worsening relationships between Jews and Romans, when the so-called Bar Kokhba revolt was crushed and Jewish political autonomy went underground until 1948.

Rich in historical and cultural detail, the book examines both the similarities and differences between Roman and Jewish society. Much attention is given to the relationship between Romans and the various ethnic minorities that populated the Empire, in which the Jews were a vital and dynamic element. Goodman has a massive breadth of scholarship, giving us critical reading of Tacitus, Pliny, Josephus (on whose firsthand account of the war all subsequent accounts are based) and the Mishnah. The most striking quality of the book is how the author put both Jews and Romans on equal footing, thereby rejecting the idea that the Jews played a minor — if historically profound — role in the development of what we call Western culture.

The final chapter proposes an intriguing gloss on the origins of anti-Semitism, telling how Jews were transformed from a normal (if highly curious) segment of the Empire into a marginalized people in only a few generations. Christianity, craving acceptance in the Roman world, adopted this hostility toward the Jews as a way of gaining legitimacy. By the time Constantine Christianized the Empire, this anti-Jewish stance was already neatly embedded in both Roman and Christian tradition. Goodman’s book chronicles the development of a mindset that has proven durable almost beyond belief.