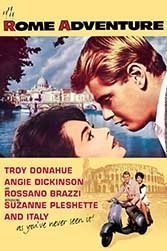 Among the films representing postwar Rome, the 1953 “Roman Holiday” (Audrey Hepburn, Gregory Peck) and “La Dolce Vita”(1960) stand out, the former a study in innocence, the latter in decadence. “Rome Adventure” has been largely forgotten, and perhaps shouldn’t be, though the screenplay is predictable and packed with stereotypes.

Prudence Bell (perky Suzanne Pleshette), a 21-year-old librarian at a woman’s college in Connecticut, heads to Rome to find love. She has three possibilities: Albert Stillwell (Hampton Fancher), a student of Etruscology, whose pickup line is “Do you have any interest in the Etruscans?”); Roberto Orlandi (Rossano Brazzi), a reserved, charmingly lecherous Italian twice her age (“I think It takes a man to make a woman out of a girl”); and American graduate student Don Porter (Troy Donahue), as pretty as Prudence but otherwise ordinary (“A couple of Stregas turn the world gold for me…”). As a rival for Don’s affections, Lyda Kent (a devilish Angie Dickinson) supplies the plot’s only tension.

What makes the film worth seeing is its luscious portrait of Rome, orchestrated by director of photography Charles Lawton, Jr., whose credits include “The Lady from Shanghai” (1947). Lawton had a reputation for excellence in the black and white medium (here he works in color) and for outdoor action films. He and director Delmer Daves offer a virtual tour of Rome’s attractions: Piazza Navona (where Prudence works in an American book shop), the Coliseum, the Altare della Patria, the Campidoglio, Piazza della Repubblica, the Tiber, St. Peter’s — and more. Prudence rides sidesaddle on Don’s Vespa. When Don and Prudence travel north, we see the “monster” sculptures at Bomarzo, the leaning tower, and a spectacular Dolomite refuge.

Fancher, who plays the Stillwell character, went on to write the screenplays for “Blade Runner” (1982) and “Blade Runner 2049” (2017) —worlds away from 1962 Rome, just as Fancher, with ties to William Burroughs, was no student of Etruscans.