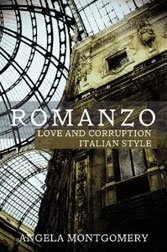 he themes of Montgomery’s novel are implicit in the title’s double meaning. There’s a love story — romance — as well as a novel of ideas and plot — romanzo, which means a novel in Italian. The romance is between Marsya and Marco. She’s a lovable but hare-brained British actress, a sometime language teacher and believer in creativity, synchronicity and spontaneity. She’s been seduced by Italy. Architect Marco is thoughtful and elegant, a subscriber to rationality and planning. His own view of Italy is far more unsure.

Their story plays out in Milan in the early 1990s, where the unraveling Clean Hands corruption probe and the rise of a new political party put the protagonists’ two modus operandi — and feelings — to the test. It would be hard to find another book that so effectively portrays the personal compromises and social dynamics that underlie today’s Italy. In Pregiato, a low level bureaucrat who drives a Porsche, Montgomery nails the mentality and motivations of Italy’s political class. Through Montgomery Lepore, an old Italy hand, she shines an appreciative but unsentimental light on both the country’s light and dark sides.

It’s all there: the day-to-day beauty, the aesthetics, the unabashed self-interest and compromises, the love of pulling something off. Milan residents will see their city with fresh eyes in her lyrical descriptions. Readers unfamiliar with it will see an Italy that insular, work-oriented Milan shows only to those who take the time to let it grow on them.