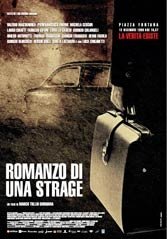 Marco Tullio Giordana’s film helps explain why Italians remain mesmerized by far-fetched conspiracy theories. On Dec. 12, 1969, the Milan headquarters of the Banca Nazionale d’Agricoltura was bombed, leaving 17 dead and 88 injured. The incident embedded itself so deeply into the Italian national consciousness that it became know simply as “Piazza Fontana.”

Director Giordana, a veteran of probing the murky depths of contemporary Italian history (his films include “I cento passi,” on the Mafia, and “La meglio gioventù,” which focuses on Italian television) zeros in on the relationship between police commissioner Luigi Calabresi (Valerio Mastandrea) and Giuseppe Pinelli (Pierfrancesco Favino), both superb. Anarchist Pinelli was arrested and interrogated after the bombing, but mysteriously fell to his death from the fourth floor of police headquarters while in custody. The Italian left savagely accused Calabresi of being responsible for the death.

Tullio Giordana, who faces a difficult directing brief, uses “chapters” to make sense of the right-left divide that marred the Italian scene at the time. The film’s insider references, such as “strategy of tension,” will be understood by informed Italians, who will also recognize key figures such as Prime Ministers Mariano Rumor and Aldo Moro, the latter kidnapped and murdered by the far leftist Red Brigades in 1978.

Tullio Giordana misses a golden opportunity to educate those who weren’t there and don’t know the arcane details. He fails to identify the principals with subtitles or helpful name repetitions. It’s a pity, since a more inclusive, explicatory narrative might have helped a younger generation better understand events that still color the Italian political scene.

As it is, the plots and counter-plots that emerge from the still-debated bombing help explain why Italians seem to believe almost anything — if it’s complicated enough. Based on Paolo Cucchiarelli’s book “Il segreto di Piazza Fontana.”