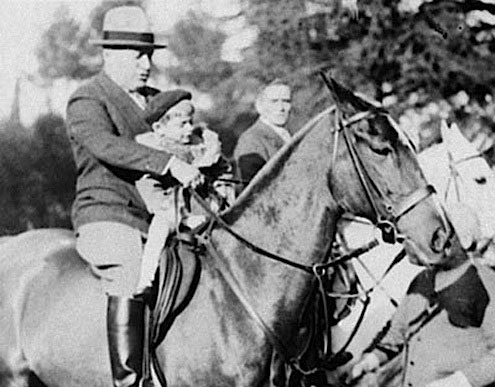 Young Romano Mussolini, shown in 1932 on horseback with his father, the dictator Benito Mussolini, at the family villa in Rome.

As Benito Mussolini slipped into the car that would take him one last time from Gargano, his Salò republic hideout, his wife Rachele recalls her husband pausing to listen to a wistful trail of music emerging from an upstairs window. It was Mussolini’s youngest son, 18-year-old Romano, playing the piano.

Eleven days later, on April 29, 1945, Benito Mussolini’s bullet-ridden and mangled body was hung on a meat hook in Milan’s Piazzale Loreto for anti-Fascist partisans to jeer. Beside him was his mistress, Clara Petacci, and 13 other Fascist officials.

The Gargano anecdote appears in Anton Barbon’s “Aspetti della Privacy di un Dittatore,” and jazz pianist Romano Mussolini, 77, confirms its accuracy. The song he was playing when his father departed, he recalls, was Duke Ellington’s “Saddest Tale.” It was perhaps the only fitting tribute the youthful Romano, who would become one of Italy’s more popular jazz musicians, knew to pay to his doomed father, a Verdi-loving amateur violinist who had introduced him to music.

Years earlier, in New York City, Ellington told Romano the song was written while his mother lay dying, Mussolini recalls. “I told him that every time that I listened to that song, I was moved to tears, and he said, ‘Then Romano, you really do love the blues.’”

Yet in the bitter aftermath of World War II, the apolitical Romano, his surname cursed, faced an uphill struggle to succeed as a self-trained musician. The legacy of fascism was reviled. In 1950s Naples the fledgling pianist, once coddled as the son of dictator, played under an assumed name, making 320 lire a gig. In Rome, he says, he sold chickens to survive.

“At the beginning, he never wanted to use his name,” says Cici Santucci, a trumpet player who has appeared with Romano since the war. “It was we musicians who told him, ‘You have nothing to do with politics. You are a musician. Use your own name.’”

At Piazza Verbano’s “Due G” Bar, where his face is familiar to patrons, Mussolini relaxes into the past. In the 1960s, when the “Romano Mussolini All-Stars” band was in its prime, he lived in a spacious apartment overlooking Villa Ada with his first wife, Anna Maria Scicolone, Sophia Loren’s sister. One of their daughters, Alessandra, is now a prominent rightist politician. Musicians flocked to see him. “I remember that Ella Fitzgerald ate like a bird, despite being fat. She was on a diet, so we had diet lunches.”

In 1963, Mussolini, who has no formal jazz training, released the critically-acclaimed “Jazz a Studio 7,” which established him as a major musician on the Italian scene. He received crucial support from his prewar friend Ellington and also played with Dizzy Gillespie, Tony Scott and Chet Baker (who according to jazz legend told Romano, “Sorry about your Dad,” upon meeting him for the first time.) Romano fondly recalls a trip to the Lionel Hampton Jazz Festival at the University of Idaho. “They [American jazz musicians] showed me affection and esteem,” says Mussolini. “In front of them, I was like a child. They knew that, but they saw that I played with real feeling.” Jazz critic Leonard Feather apparently agreed. “He told me, ‘Romano, you have never studied jazz. Had you studied you would have become a padre eterno. But you play with sincerity. And so your jazz is good jazz.’ This was one of the greatest satisfactions of my life.”

Trumpeter Santucci credits Mussolini for helping usher jazz into postwar Italy. “Jazz critics have sometimes criticized him for not taking a more intellectual approach. But he has brought jazz to a wider audience.” Audiences rarely showed him disrespect, says Santucci, “because [he] is so passionate about jazz.”

Music first attracted Mussolini in the early 1930s, before he could read. His recollections are innocent. “I listened to all kinds of music when I was little. My father liked the 1800s — Verdi, Puccini. Everyone in our family loves music. Orchestra directors, musicians came to our house at Villa Torlonia.”

Rome’s sprawling Villa Torlonia, on Via Nomentana, was Benito Mussolini’s official residence. There, both father and son played. Romano remembers his father as “very attached to those fifteen or twenty minutes of the day when he could relax with his violin.”

On occasion, despite differences in musical taste, the two played duets. One such moment came in Gargano. “I was playing the piano. He took out his violin, and we started playing the ‘Vedova Allegra’ waltz together, a very difficult piece. He said, ‘Romano, it’s not like that,’ because I played by ear, and this irritated him. He would have wanted me to study at a conservatory.”

Romano picked up his love for jazz from recordings brought to Rome from Britain and the United States by his brother Vittorio and sister Edda (Romano was one of five Mussolini children). “I liked all kinds of music, but what stayed with me most was jazz, and blues in particular. The first record I had was Ellington’s Black Beauty. I think I still have it.”

Learning American riffs in the home of a leader whose regime eventually denounced jazz as “enemy music” is an irony Romano dismisses out of hand.

“I was never censored from playing jazz at home. There were really only two years, 1941 to 1943, when American music was prohibited. Contrary to what everyone thinks, even the Germans had their jazz orchestras during the war. I remember that once we went to Germany, and in the barracks there was a wonderful German soldier who played jazz, Duke Ellington and boogie-woogie, which was very difficult. I saw immediately that this was a real musician. I sat down with him, and he taught me some Ellington.”

His father did not try to impress his love of classical music on Romano, preferring instead to encourage his overall musical interest. Romano made short-lived attempts at taking up the violin and the harmonica. “In 1941, it entered my head that I had to play the saxophone. I remember that [the saxophone] cost 1,300 lire and they gave me a discount. Afterward, I could not get the hang of it.”

At 16, a school classmate who played violin gave him a piano lesson, beginning a love affair with the instrument. “[He] taught me how to place my hands on the keyboard. This was all the technique I ever learned. After three months, I knew how to play the piano. I would play five, six hours alone, for fun almost. The first thing that I did when I went to my friends’ houses was sit down and play. For music, you leave everything else, let everything else go — friends, girlfriends.”

The quintet still appears from time to time, with Mussolini on keyboards, his trademark navy blue fisherman’s cap pulled down to his eyes. “True happiness is doing the job that we like,” he muses. “I like playing. What can I do about it? As long as I have my health and the will, I’ll play.”