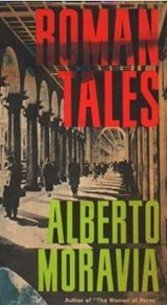 By Alberto Moravia, translated from the Italian by Angus Davidson

Behold poor and grimy Rome of the immediate postwar. Alberto Moravia’s morality cameos are awash in seduction, jealousy, betrayal, murder and blue-collar gossip. For every Mario or Ugo there’s a Serafina, Adalgisa, Serafino, Iole, Tuda, Nespola — rural names only recently relocated from country to city. Here are barbers and plumbers, truck drivers and cabbies, caretakers and undertakers, their appetites whetted by the slightest whiff of gossip and conspiracies, distraction from a mostly bleak day-to-day. This Rome, in summer, is “as melancholy as a cast-off garment.” Pasta is cooked by the bowl-full by scheming girlfriends or brooding wives, some still illiterate. People live “far from the world” on Via Salaria, then as remote as Monte Mario, now both part of inner Rome.

The pleasure of these 26 Boccaccio-like slides is how sharply they outline a still half-medieval place, one that makes the chasm between 1950 and 1970, when Italian modernity took root, seem more like a millennia. Via die Coronari, Via Condotti, Campo de’ Fiori, Via di Ripetta, and Piazza Venezia are not the tourist sites of today but the working class haunts and artisan bastions and anchored the neo-realist movement in film.

Moravia is raw and wry. To wit: A jealous friend provokes a fight between his unrequited love and the man she loves, hanging a sign “Closed for family bereavement” on the storefront while the two go at it. A fastidious man who likes ironing, washing and sewing can’t understand why his homebody wife leaves him. A middle-aged man courts a teenage girl only to feel ashamed, after which she marries an even older man. Hot-tempered rivals seem forever ready to clash (usually over money or women) but typically succumb to cowardice. It’s very much a male world, just listen to a thief: “Locks are like women: the right key, like the right approach, is to be find not by intellect but intuition.” No casual decadence or middle class values here. Instead, a walk through a city that has vanished. Moravia rued his early translations into English, and rightly so.