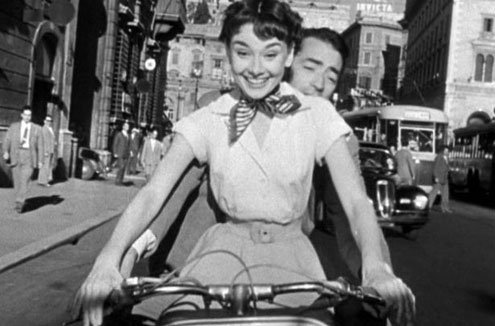 #8220;I’m a Roman housewife, just what I want to be… I’m also fully Italian now. I never was part of Hollywood or anywhere else, and I’ve finally found a place that I can call home.” — Audrey Hepburn, 1972

Thanks to a movie with an irresistible title, Audrey Hepburn and the city of Rome remain inextricably linked. For many in the post-World War II generation, the idea of Rome was personified by the image of Hepburn perched on a scooter.

In 1953, then 24-year-old Hepburn, a newcomer to Hollywood, starred along with Gregory Peck in William Wyler’s “Roman Holiday,” in which she played doe-eyed ingénue Princess Ann who falls for cynical American journalist Joe Bradley. The performance won her a Best Actress Oscar and lifted her to global stardom. Hepburn would go on to make many Hollywood hits, including “Breakfast at Tiffany’s” and “Sabrina,” and become a Hollywood mainstay.

But in the 1970s, she took different tack, all but leaving filmmaking behind to become a wife and mother in the city that helped make her famous.

By then, Rome was already something of a second home. With her first husband, American actor Mel Ferrer, Hepburn had spent much of the 1950s and 60s in Rome when the two shot various films at the then-thriving Cinecittà studio. Immediately after their 1954 wedding on Lake Lucerne, the newlyweds rented a beachside villa in Anzio, an hour from Rome. While Ferrer filmed “Proibito,” Hepburn immersed herself in Italian cooking, hosting evenings for guests such as Sofia Loren, Carlo Ponti and Dino Di Laurentis.

Hepburn soon became a mainstay of the so-called “Hollywood on the Tiber” jet set. By 1960, she had finished two more locally shot movies: King Vidor’s “War and Peace,” co-starring her husband and Henry Fonda, and Fred Zinneman’s “The Nun’s Story” (she played Sister Luke in a role she said was both her favorite and her best).

Photographer Pierluigi Praturlon took a memorable shot of Hepburn on the terrace of Rome’s Hotel Hassler as she opened a telegram from the New York Film Critics Circle announcing she’d won best actress for the role.

But by 1968, the Ferrer marriage was over. Hepburn rode out much of the divorce with Rome friend, Countess Lorian Franchetti Gaetani-Lovatelli, the sister of Henry Fonda’s ex-wife. That same year, aboard a Mediterranean cruise hosted by Princess Olimpia Torlonia, Hepburn met Andrea Dotti, an Italian psychiatrist who, at 31, was 10 years her junior. In January 1969, a mere six weeks after her divorce from Ferrer was finalized, Hepburn and Dotti wed.

Joined by Sean, Hepburn’s son from her previous marriage, the couple moved into an extravagantly frescoed penthouse overlooking Rome’s Castel Sant’ Angelo. Pregnant with son Luca only four months after the marriage, Hepburn, who had a history of miscarriages, spent her pregnancy resting at La Paisable, her Swiss chateau.

“Mamma began to live the life of a true Roman,” Luca wrote in his 2013 book, Audrey in Rome, a collection of photographs that paid homage to his mother’s Roman style.

But cracks had appeared in the marriage. Though Dotti visited her dutifully on weekends, the rest of the week was a different story. He was repeatedly photographed by paparazzi in the company of beautiful women as he caroused through Rome’s rich nightlife.

“Andrea and I had what you would call an open marriage,” Hepburn confessed in 1982. “It’s inevitable, when the man is younger.”

Hepburn, too, had affairs. During her marriage to Ferrer, she became involved with co-stars William Holden and Albert Finney. Later, while married to Dotti, Hepburn and “Bloodline” co-star Ben Gazarra were briefly lovers.

Despite glaring problems in both marriages, Hepburn was determined to make them work. “I hung on in both marriages very hard, as long as I could, for the children’s sake, and out of respect for marriage,” she admitted to US Magazine in 1988.

With Luca’s birth in 1970, the family moved to a spacious palazzo on Via di San Valentino in Parioli. Hepburn unapologetically assumed the rituals of domestic life, rising every day at dawn to see her husband off to work and the children off to school. With the exception of “Robin and Marian” and “Bloodline,” her acting career went cold for most of the 1970s. Her sole priorities were raising her sons, cooking, shopping, gardening, and caring for her animals.

Hepburn’s world was briefly rattled in 1974, when Rome was hit with a wave of high-profile kidnappings. After gunmen tried and failed to abduct Dotti from his Via Crescenzo office, the family hired a bodyguard, and temporarily dispatched Sean to a boarding school in Switzerland.

Hepburn and Dotti divorced in 1982, when she was in her early 50s. She never remarried.

The Belgian-born daughter of a Dutch baroness and an English banker, Hepburn was a child of divorce who grew up during World War II. Her relationships with both her parents were chillyand she saw herself as an introvert. She hoped that raising her sons in Italy, with its extraordinary emphasis on family, would yield be more pleasant.

“She wanted to be with her family. She wanted a private life,” Hepburn’s son Sean Ferrer told The Telegraph in 2003 in discussing his mother’s Roman years. “And she couldn’t bear the thought that she might fail as a mother. It was too important to her.”

On Christmas Eve 1993, months before her death from cancer, she read a Sam Levenson poem to Sean and Luca that began with the line: “For attractive lips, speak words of kindness. For lovely eyes, seek out the good in people.”