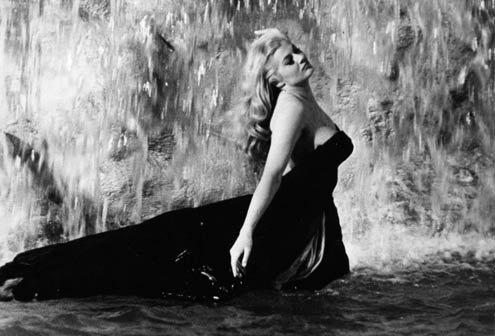 Anita Ekberg in the famous fountain scene from Fellini's "La Dolce Vita."
I

t’s August. Anyone who has lived in Italy for any length of time knows it as the most important month of the year. August is when people go on holiday or spend time with their families. It’s when they leave city life behind, however briefly.

But I’m not among the go-away crowd. This is the fifth consecutive August I’ve spent in Italy and the seventh overall. Maybe it’s because I’m not part of the traditional celebrations — my roots aren’t Italian and I don’t necessarily associate the month with holiday — that August rhythms have such a fascinating, even hypnotic hold over me. I watch as shops close their shutters and homes are locked up. People seem to flee.

The deepening recession economy may have limited the exodus (or so statistics say), but all the same there are few Romans on Rome’s streets.

I’ve watched enough mass departures over the years to accumulate my share of visual memories: The slow-as-honey feeling permeating the days; the bright dresses standing out in relief against darkly singed skin; the packed-like-sardines feeling at the beach; and of course, the heat.

At the end of each July comes a single repeated question, Ma dove vai per le ferie?

My answer is always the same. I’m not going anywhere. Sto qui a Roma. “Vacanza Romana,” nod my friends, as they go on to tell me of their glorious and upcoming August plans.

I can’t complain. At least the sun burns silently. Over the years I’ve actually become more and more fond of my August days.

If you, too, find yourself “stuck” in Rome between now and the end of the month, here’s a list of tips I’ve put together to make the most out of this festively vacant time of year:

— Get out of Rome: When the relentless heat and urban dust seem to cover you head to toe, wash it off. Rome doesn’t lack for shorelines. Train or car, it doesn’t matter. This August I’ve gone by train to Lago Bracciano (a half-hour ride) to bathe in its placid waters. A shorter train ride away is Lago Albano. I love going to the sea but not to crowded Ostia, Rome’s nearest beach. Sperlonga and Santa Marinella, also on the Tyrrhenian coast, are far enough from Rome to find translucent waters and near enough to get there and back in a day.

— Become a tourist again: While the Romans use August to pause, tourists stream full throttle through the city center. They’re everywhere: their glistening tour buses line Lungotevere and their quaint fishing hats bobble through the otherwise empty streets. Because the tourists keep the center thriving, it’s the best place for a walk and the only place for people watching. On a similar note, August is my favorite time of year to visit churches. The stone and marble keep things cool. I like to bring a book and camp out in a pew.

— Play in the water: Rome’s abundant supply of water is a summer godsend. May the Roman god Jupiter bless those old Romans and their enduring aquatic ingenuity. Consider Acqua Vergine, one of many Roman aqueducts built to serve the city with fresh water (collected as rainwater from the nearby Alban Hills). As a result, wonderfully cold drinking water flows from nasoni, the city’s ubiquitous street-level fountains, and shoots from all heights in its larger ones. But don’t take my suggestion too literally, at least when it comes to bathing. A midnight fountain jump may land you unwanted attention from carabinieri, who hang around the major fountains for just such occurrences.

— Go outside at night: After a full day of sun and heat, it’s hotter inside my apartment than outside it. Though outdoor activities tend to slow to a trickle (lots of movie theaters close), there’s relief if you look for it. Where I live, in the Celio neighborhood, a bar and restaurant is up and running in the park along Via Claudia. At Piazza Vittorio films are screened at night outdoors. Along the banks of the Tiber, temporary shops, bars, restaurants, games, and entertainments are open nightly, with their numbers and variety increasing annually. All around are piazzas with abundant benches. They make an ideal destination after a walk and some white wine.

If all else fails, make friends with someone who has a terrace (or air-conditioning). If you do, I can pick up some wine and be over shortly.